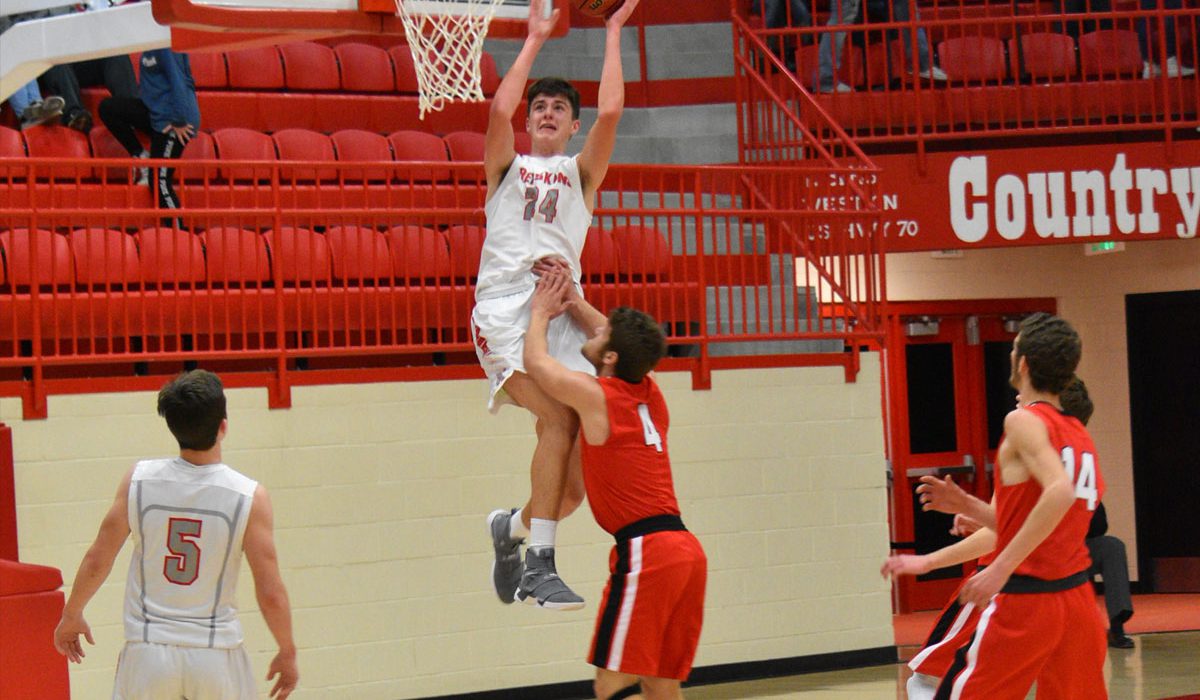 Kingston's Jacob Germany goes up over Comanche's Brandon VanOven for a rebound and putback. Photo by Vicki Droddy.

KINGSTON – The Comanche girls and the Kingston boys got solid play from their respective post players and surged ahead for wins on Friday night.

Misty Dossey had nine blocks on the evening to lead the defensive charge for Class 3A No. 4 Comanche. The Lady Indians took over in the first quarter with good ball movement on offense and turnovers created on defense and led by as many as 17 in the opening stanza.

Dossey led the way with 26 points on the night.

Comanche was up by 36,25 at the break, but the Lady Redskins weren’t done yet. A three-pointer by Alli Wakely and a three-point play from Kes Reeves helped as Kingston got to within eight points at 40-32.

But Comanche closed the door after that as Jordyn Morris’ aggressively grabbed a couple of steals and had four points in a 6-0 run that opened the lead back up to 14.

Comanche then used a steady dose of passes inside to Dossey in the fourth and kept its record unblemished after 18 games.

The Redskins, No. 10 in Class 3A, came out on fire in the nightcap, hitting their first three shots, all from behind the arc.

Kingston got out to a 23-2 lead with Jacob Whipkey draining three 3-pointers in the quarter while Jacob Germany was a force on the inside making four shots in the lane.

Germany had a game-high 21 points on the night. Whipkey also scored in double figures with 16 points.

“We played hard,” Kingston coach Taylor Wiebener said. “We hit a lot of shots early and everyone was making them.

“I wasn’t happy with our defense in the second quarter, though. We kind of put it on cruise control.”

The Kingston lead was only 20 at the break. And Wiebener spoke well of the Comanche effort throughout. But also recognized his team did more than just shoot well.

“They were very physical and played really tough. But our defense really stepped it up and played well in the second half. We denied them a lot of opportunities.”

As a team, the Redskins also made nine 3-pointers on the night.

Brandon VanOven had 17 points for the Indians.

Comanche next plays on Tuesday night hosting Davis. Kingston takes to the road on Tuesday to face Plainview.