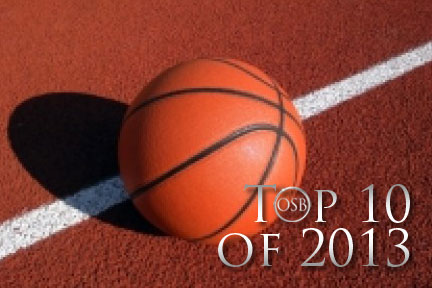 A team of destiny.

That’s how Millwood head coach Varryl Franklin described his team in retrospect.  The Falcons took the 3A boys’ basketball state championship in a way that has never been done before and won’t be repeated.

It started with a bizarre finish against Hugo in the quarterfinal matchup.  Millwood trailed Hugo, 37-36, in the closing seconds.  But unfortunately for the Buffaloes (and fortunately for the Falcons), Hugo’s Trey Johnson took an inbound pass to the wrong goal and scored two points for his opponents.  Millwood won 38-37.

It was an incredibly unlikely finish for any game, much more that of a state tournament contest.  And the shock waves of that shot and disappointment for Johnson and Hugo were felt throughout the state.

But supplied with new life, Millwood moved on.  This time, it would be a Falcon responsible for the game-winning points.

MIllwood was facing Centennial, the two-time defending champion.  And four quarters and an overtime session wouldn’t be enough.

The game was finally won on a buzzer-beating put-back by Ashford Golden in double overtime, as Millwood took the state semifinal game, 59-57.

As if an incredibly improbable ending and an ending that required two overtime weren’t enough to establish the seeming destiny of this team’s championship run, taking the state championship game to three overtimes should solidify at least the possibility of that concept.

And that’s exactly what happened.

Millwood needed 44 minutes of court time to secure its 15th state championship.  The Falcons defeated Okemah, 59-53, in triple overtime in the Big House.

Golden had a double-double and Michael Mays put in 19 points in the title game.  Millwood finished the season at 20-9.  And state champions.

Franklin said he was thankful for the opportunity and proud of his team.

“We felt very fortunate,” Franklin said.  “Opportunity came and I was proud of the kids and they took advantage of the opportunity.  We really feel blessed that we were put in that position.  And the kids took that same type of attitude.  They felt fortunate and that they were supposed to be there after that happened.”

And Franklin wasn’t afraid to put the “D-word” into the conversation about his team’s journey.

“If you had asked me right after it occurred, I probably would have said that we were really mentally tough.  We were primed and tough for a bunch of young kids.

“But now with perspective, it was just a thing of destiny.  We were blessed and we took advantage of it at the right time.”

It’s a title run that is the type of which legends are made.  And in state tournament history this one is instantly legendary.