A little more time gave Berry a chance to shine 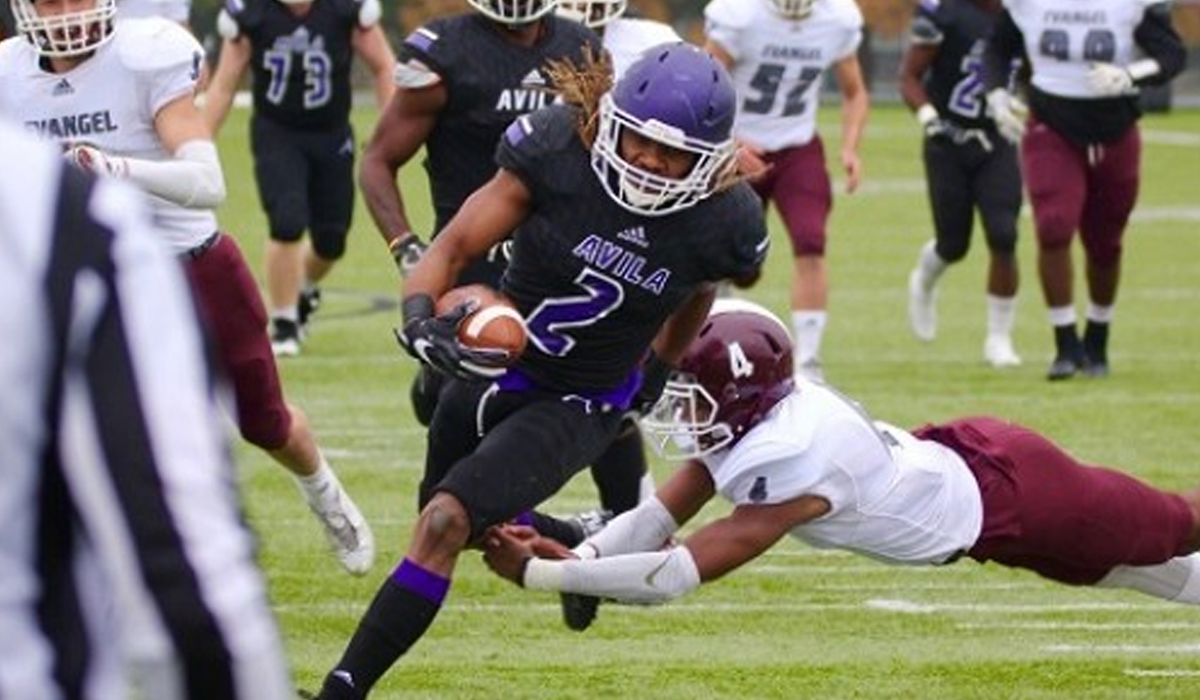 Following a season in which he brought in more than 60 receptions and racked up more than 700 receiving yards, it is hard to think that Theo Berry III had already decided to ‘hang ’em up’ before this part of his career had even started.

Fans of Avila football are glad he didn’t.

Berry was the leading receiver for the Eagles in 2017 and scored a team-high 44 points last year. That was without playing in all the Eagles’ games.

He didn’t take the direct route from Shawnee, Okla. to Kansas City, Mo., but since he has been at Avila, he has made his mark on the program.

Theo Berry was a multi-sport athlete at Shawnee High School, competing in football, basketball and track.

“Football was probably my best sport, but basketball was my favorite,” Berry said.

Following his graduation with the Class of 2012, he stuck with the sport he considered his best and found opportunities to play at the next level, with his first stop at Miami, Okla. But after only a short stay at Northeastern Oklahoma A&M, he headed west to Stillwater.

“I went JUCO for a semester,” Berry said. “Left there and decided to walk on at Oklahoma State. Coming out of high school, that was the school I wanted to play football at.

“It was really competitive, really fun and exciting. Fast. It was exciting to get that opportunity to get to do that.”

But with the stable of receivers that had been collected at OSU, it would be a tough rotation in which to remain, with players like future Biletnikoff Award winner James Washington with which to contend for playing time.

Berry would start to look at other possibilities.

“I stepped out because, pretty much for my future, it didn’t seem that I was going to get the opportunities that I wanted,” Berry said. “I was trying to find somewhere else to go. I was in contact with Nevada and I was going to try to go there. But since I had only one and a half years left of eligibility, three semesters, I couldn’t transfer D-I to D-I and be eligible to play, so I would have burned my year.

“And since that happened and I was denied D-I eligibility that was when I decided to go ahead and hang ‘em up.”

And life itself seemed to lend to that decision. Berry was now married and his family was growing. But while working out in Shawnee, a new direction presented itself.

“I was up training with my little brother at the high school I used to go to and my high school coach’s son was working here as a G.A. for Avila football,” Berry said. “He asked me if I was still playing football and I had decided to stop because I gotten married and I wasn’t going to play football anymore.

“But he asked me if I still wanted to play. I had a season before my son was going to be born, so I was going to play one last season and then hang ‘em up. And I ended up having more eligibility, so I came back for one more year.”

Extra time on the field afforded him another chance to shine. Playing in just nine games, Berry was fifth in the Heart of America Conference in 2017 in receptions and seventh in the Heart in receiving yards.

Avila’s new head coach, Marc Benavidez, has been on the sidelines for the Eagles for the last six seasons, most recently as the offensive line coach, and saw first hand the impact Berry has had.

“Last season was a great year,” Benavidez said. “It was something in which he was really developing and kind of learning our terminology. (He was) one of the best guys on the field every single time we had a game.

“He ended up missing games due to illness and one as we were still waiting on the clearinghouse. But he exploded out there.”

The Eagles’ coach said Berry’s numbers have the potential to be better this year.

“It wasn’t easy for him at times, because we had a lot of inexperience at quarterback last season. We had three guys that hadn’t ever started a college game that played for us, so we definitely didn’t have the opportunity to get the ball to him as many times as we had wanted to.

“He still had more than 60 catches and 700-plus yards, seven touchdowns. But there were a lot of games in which he had two catches, four catches – whatever it might have been – and even though he was a big part of the game plan, we just couldn’t quite get him the football.”

Benavidez said this year the quarterback position may be the strongest spot on the team. Even so, he said he’s pleased with what Berry brings to the table.

“Right now in camp, he’s taken on a great leadership role. He’s obviously developed as a man since he’s been here as well. He’s married, he’s just had a child and you can tell that right now he’s got a great mindset to do whatever he can to help the team get better and help the team win.

“He is literally being a coach on the field in every single practice we’ve had, telling the every young guy, ‘You’ve got to go full-go,’ or ‘That’s not a good enough effort,’ or ‘You’ve got to be lined up here on the numbers.’ He’s just a great guy and in general right now and for what he’s doing for our team, I can’t really ask any more of him.

“And on top of that, when he’s on the field, he’s one of the most explosive guys out there.”

It is a team and school in which Berry has found his niche.

“It’s a good little school,” Berry said. “I like it. Everybody knows everybody. All the teachers to the cafeteria ladies, everybody is really friendly and welcoming.

“I’m not necessarily a shy person, but I’m not outgoing. And everyone around campus, the players and the teachers, everyone just makes you feel comfortable being here.”

He gets one more season of time on the field and just like last season, he gets to see a whole new set of opponents as Avila has moved to the Kansas Collegiate Athletic Conference.

“We’ve got a good opportunity to do something Avila’s never has. We have a lot of returners and a lot of new guys and there’s a lot of competition in this fall camp. This is probably the most talent they’ve said that they’ve had in an Avila team. We’ve changed conferences and the whole team is excited. I’m really excited to be a part of this team in building a winning culture and foundation because I can see it developing here. I’m really excited about this season.”

HIs eligibility will finally be exhausted after the 2018 season, but Berry himself may not have exhausted his desire to play.

“But other than that, I’m going to graduate with a kinesiology degree and have a minor in education, so I’ll be able to coach or teach and that’s what I might do from that angle.”

Soon it will be time to hang ’em up, but there are a few more catches to Berry to make before that day.