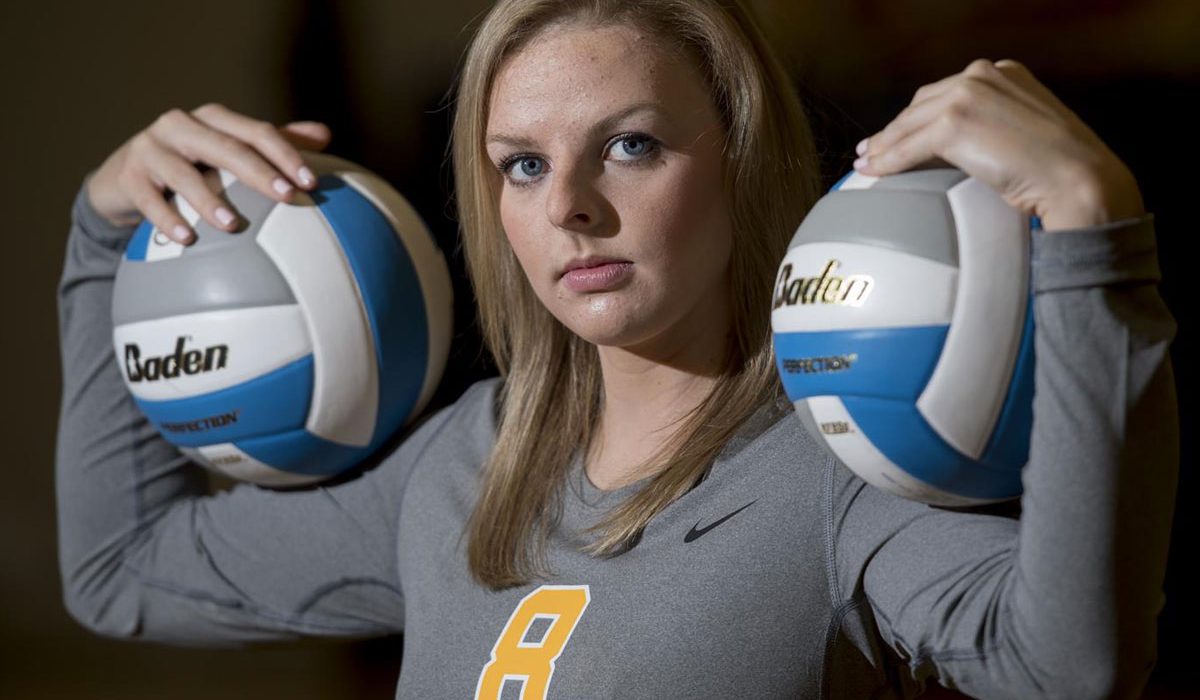 Taylor Bevis and Jordan Spence share so many similarities and just as many differences — in style of play and personality — yet they have been roommates throughout college and have guided Central Oklahoma’s volleyball program to unprecedented success over the last four years.

One is a 5-foot-10 outside hitter always on the go, switching from front row to back row and left side to right side.  The intensity and effort is obvious on Bevis’ red-cheeked, sweat-stained face as she repeatedly propels herself into the air to try and notch yet another kill with a violent swing of the right arm.

The other is a 6-foot-1 middle blocker constantly moving back-and-forth along the net, bouncing up-and-down as if on a pogo stick as she reaches for the sky again and again trying to reject yet another attack attempt by a frustrated opponent.  Spence’s ever-present smile is barely hidden behind a mask of concentration.

Together this dynamic duo has won the most matches of any four-year senior group in school history – 114 and counting, including a stunning 44-3  home record – while also stamping themselves as two of the premier players in program history.

And this weekend could be the final chance for UCO fans to see this terrific twosome in action at Hamilton Field House.  The No. 14-ranked Bronchos host No. 6 Nebraska-Kearney at 6 p.m. Friday and Fort Hays State at 4 p.m. Saturday on Senior Night in the final two home matches of the regular season.

“It’s crazy that this could be the last weekend to play on this court,” said Spence while sitting courtside at Hamilton Field House.  “It’s been four years and it goes so fast, which is what everybody said when I got here.  My freshman year I was thinking there’s no way this goes fast, but now it feels like we skipped a couple of years.”

“It’s a big weekend, not just competitively but also it being the end of our time here,” Bevis said.  “It’s going to be a happy and sad weekend, but if we win out we can still host the conference tournament so this might not be the last time I play in this gym.”

Four years ago, neither could have imagined being at this point.  Spence was a local product, a star at Edmond Santa Fe High School, while Bevis came from Wichita, Kan. after a stellar career at Bishop Carroll High School.

They had met briefly on the competitive summer club tour, yet after coming to UCO the two were paired together by head coach Edgar Miraku and became on-campus roommates.  And roommates they remain, with both set to graduate in May.

Their on-court pairing has been something to behold as well.  Both are three-time All-MIAA performers and figure to become just the third and fourth players in school history to be four-time selections at the end of this season.

Bevis, last year’s MIAA Player of the Year and a two-time All-American as well, is one of UCO’s all-time best hitters.  She ranks third in career kills with 1,701 and also has more than 1,000 digs and 200 total blocks, solidifying her status as among the best all-around performers in Central history.

And getting a big kill off a well-placed set, which has happened thousands of times during her career, is still a big thrill for the veteran.

“That’s what you want every time, hitting the ball hard and straight down, but sometimes you barely touch it and you’re not sure how the ball hit the floor,” said Bevis, who played all last year with torn cartilage in her left knee that required off-season surgery.  “That stuff gets you so excited.  It hypes everybody up and creates so much energy.”

Spence has been a force at the net since stepping on campus, showcasing a blocking prowess and high-percentage attack that has helped catapult the Bronchos to never-before-seen heights.  She ranks in the top seven in both career solo and assisted blocks while also carrying an eye-opening .324 attack percentage.

“It’s a great feeling, especially when it hits your hands solid and goes straight down” said Spence of getting a block.  “It’s definitely a play that’s celebrated because you’re preventing your opponent from getting a chance to score and it gets everybody excited.”

And to think both players got their start at the YMCA.

“I started playing at the Y when I was 10 and didn’t get into competitive play until I was 13,” Spence said.  “I was one of the tallest players when I started so they stuck me in the middle and I’ve been there ever since.”

“I actually played setter when I started at the Y when I was probably in the second grade,” Bevis said.  “I played in the middle for awhile when I was in elementary and middle school because I was taller than everybody else, but then when I started club ball I went to the outside.”

Both prospered at their positions and eventually found their way to Edmond, to the benefit of UCO fans and the Broncho program.

“I visited most of the top MIAA schools and when I came here I thought this would be a good fit for me,” Bevis said.  “I got to practice with the team on my visit and that sealed it for me.  Every girl here was so nice and so welcoming that it just felt right.”

“My parents, grandparents and great-grandparents all went to school here,” Spence said.  “I liked the school and it was a place that was comfortable to me and felt like home.  I’m very happy with how it turned out and wouldn’t change a thing.”

Now the dusk of their careers is nearing.  Both players are grateful for what UCO has meant to them and how they can add to the legacy they have helped so much to grow.

“As a freshman I didn’t know what it meant to play UCO volleyball,” Spence said.  “But it’s to play for your school and not settle for less than your best.  We try to pass that on.  Looking back, it’s amazing to see all the success we’ve had.  It’s cool to look back and see all that we’ve accomplished.”

“The biggest thing I’ll remember is Senior Night my freshman year against Washburn,” Bevis said.  “We went to the 20s in the fifth set and won (26-24).  That was a perfect example of the type program we have.  We’re scroungers and fight for every point.  We had such a team effort that night and everybody put their two cents in and that was a perfect description of UCO volleyball.”

And it’s a pretty fitting illustration of UCO’s Batman and Robin as well.