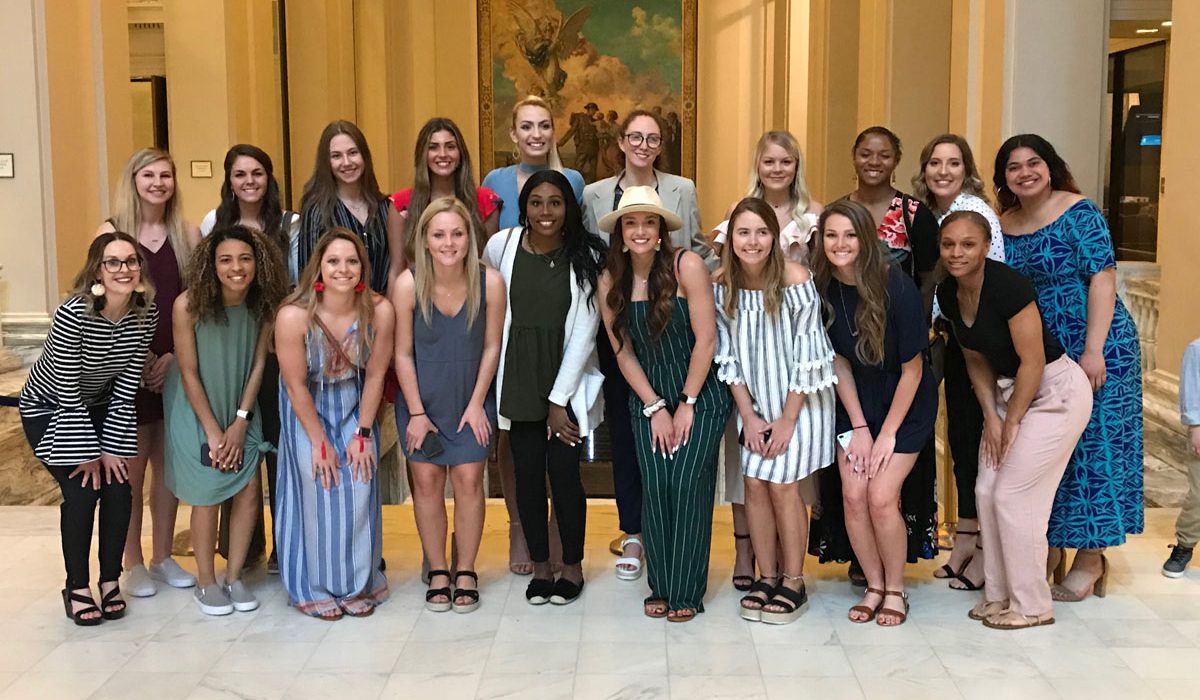 OKLAHOMA CITY – Head Coach Kelsi Musick and the 2018-19 SWOSU Women’s Basketball team were guests of Representative Harold Wright and Senator Brent Howard at the State Capitol on Wednesday as the Lady Bulldogs were honored with a Citation of Congratulations from the Oklahoma State Legislature.

Wright, the Speaker Pro Tempore of the House of Representatives, presented the Lady Bulldogs with the Citation of Congratulations, which reads:

Whereas, The Lady Bulldogs Basketball Team worked hard to have a victorious 2019 season with an impressive season record of 35 wins and 2 losses, taking them to the 2019 Division II National Finals; and

Whereas, The Lady Bulldogs Basketball Team led by Coach Kelsi Musick, has made their state, school and community proud by showing character, sportsmanship and athletic excellence.

Now, therefore, pursuant to the motion of
Representative Harold Wright and Senator Brent Howard
The Oklahoma State Legislature extends to
The Lady Bulldogs Basketball Team
Sincere commendation and directs that this citation be presented.

“Members, this is really a big deal,” Wright said as he welcomed the Lady Bulldogs to the floor. “Division II is a great national league, this isn’t a state deal. For this team to go all the way to the National Championship game is tremendous and it is great for the state of Oklahoma. I want to recognize these players and coaches.”

The Lady Bulldogs put together a memorable season that saw them defeat every team they played. SWOSU lost their season opener to Emporia State, but won the next 35 games and avenged that loss with a 71-65 victory over ESU in the opening round of the NCAA Division II National Tournament. The Lady Dawgs run through the tournament reached the National Championship game, where they fell in double overtime to a Lubbock Christian team that they had previously defeated, 77-75, in Weatherford on December 3.

“First of all, I want to thank you for having us today,” Coach Musick said when given the floor. “Fourteen of our fifteen team members are from the great state of Oklahoma and it’s a great asset for us and an honor to be able to represent the state. We appreciate the support from Southwestern Oklahoma State University and also throughout the state. We had an amazing following as we made our journey through the national tournament. We are extremely thrilled to be here and appreciative of you all for recognizing us today.”