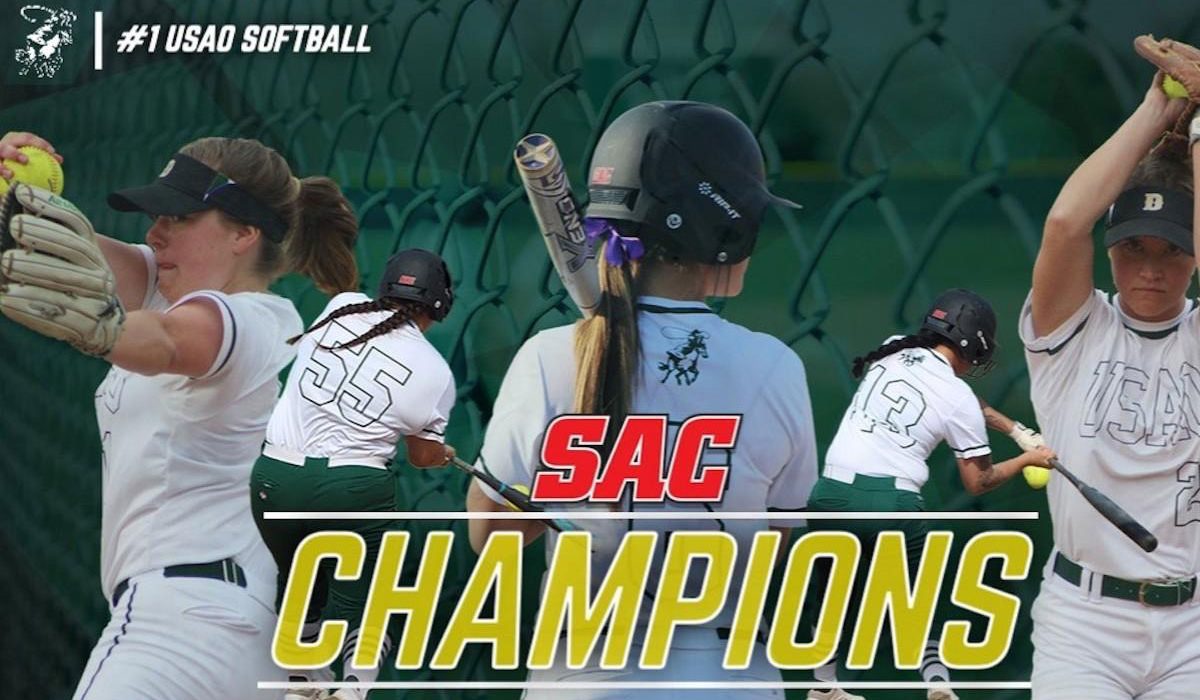 MUSKOGEE – No. 1 University of Science and Arts of Oklahoma (47-0, 34-0 SAC) clinched at-least a share of the Sooner Athletic Conference regular-season championship on Thursday at Bacone, sweeping the double-header against the Warriors. The Drovers won the first game 8-1, followed by a 9-0 shutout in game two.

The Drovers took full possession of the longest win-streak in NAIA softball history, winning their 53rd consecutive game, dating back to May 5, 2018 (349 days ago).

Emily Cerny (SO/Newcastle, OK) pitched the first four innings of the game, striking out 6 batters to improve her record to 20-0. The sophomore now boasts a 0.34 earned run average (best in NAIA), and she has struck out 217 batters (2nd in NAIA) in 123.2 innings pitched so far this season.

Jordan Weese (FR/Burns Flat, OK) pitched the final three innings of the game, allowing one earned run and she struck out 6 batters.

Tarah Madron (JR/Konawa, OK) and Karmyn Pearn (SO/Newcastle, OK) led the USAO offense, each contributing 2-for-4 performances at the plate. Pearn added a pair of runs scored and a run batted in, while Madron added one run scored. Karlie Velasco (SR/Del City, OK) finished 2-for-5 with a pair of singles and a run scored. Randa Hatter (JR/Stratford, OK) concluded 1-for-2 with a solo homerun and a trio of runs scored. Keely Kingsley (SR/Oklahoma City, OK) finished the win 1-for-3 with a pair of RBI’s, while Destinie Lookout (SR/Oklahoma City, OK) went 1-for-3 with a double, a run scored, and a RBI. Dakota Clouse (SR/Blanchard, OK) added a 1-for-4 performance in the record-setting victory.

No. 1 USAO dropped Bacone 9-0 in the series finale, tying the NAIA record for longest win-streak in a single-season, with their 47th consecutive victory to begin the 2019 campaign. The Drovers also secured at-least a share of the SAC championship with their second win of the day.

The first three innings of the game were scoreless, but that quickly changed in the top of the fourth inning as USAO scored five times. The Drovers offense stayed hot in the fifth inning, scoring four more runs before holding the Warriors scoreless in the bottom of the fifth, ending the game due to the run-rule.

Emily Cerny struck out a pair of batters, as she tossed a scoreless first inning. Lyndie Ervin (FR/Washington, OK) pitched the final four innings to earn the win, and improved her record to 12-0. The freshman’s ERA is now 1.94, and she has struck out 38 batters in 65 innings pitched so far this season.

Randa Hatter powered the Drovers offense, going 1-for-3 with a two-run homer. Hatter has homered in back-to-back games, giving her 10 homeruns and 38 RBI’s so far this season. Hatter is the THIRD Drover to reach the 10-homerun milestone so far this season, joining Kristen Prieto (JR/Moore, OK) (12) and Destinie Lookout (11).

No. 1 USAO will be back in action on Friday, April 19 when they travel to OKC to face No. 2 Oklahoma City University (44-4, 26-2 SAC). The highly-anticipated double-header between the NAIA’s top two squads is set to begin at 5 PM at Ann Lacy Stadium. The Drovers can claim full possession of the SAC regular-season championship with a win in either game of the double-header, and they can also break the NAIA record of 47 consecutive wins in a single-season if USAO wins the first game of the night. OCU was the only other team in NAIA history to win 47 consecutive games in a single-season, back in 2017.

No. 1 USAO and No. 2 OCU put on a SHOW the last time the rivals met on March 16 in Chickasha. The Drovers swept the double-header, winning game one 4-2 on a walk-off homer from Destinie Lookout, followed by a 7-6 walk-off win in the second game of the night.