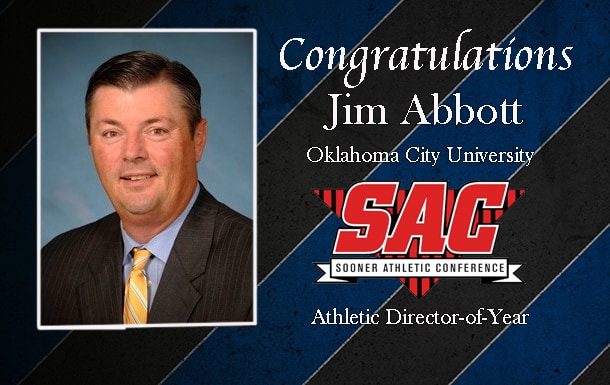 From the Sooner Athletic Conference

OKLAHOMA CITY – After leading Oklahoma City University’s athletic teams to conference dominance and national prominence, Jim Abbott has been voted by his peers as the Sooner Athletic Conference (SAC) Athletic Director of the Year.

Abbott will be the league’s official nomination for consideration of the NAIA National Athletic Director of the Year to be announced at a later date.

“On behalf of the SAC, I want to extend our congratulations to Jim. Few things are more clearly evident than Jim’s commitment to excellence and tireless efforts to provide leadership for OCU, this conference and small college athletics as a whole,” Sooner Athletic Conference Commissioner Stan Wagnon said. “He is most deserving of this distinction, and the SAC is fortunate to the receive the benefit of his contributions.”

In addition to serving as athletic director Abbott is a is a member of the Abbott is active as a member of the NACDA Executive Council, NAIA Membership Committee, Jim Thorpe Association Executive Council, vice chairman of the NAIA Hall of Fame selection committee, the Greater Oklahoma City Sports Consortium, NAIA Athletic Director’s Association Board of Directors, and serves as staff sponsor for the OCU Fellowship of Christian Athletes huddle.

Abbott has previously served as president of the NAIA Athletic Directors Association and as a member of the NAIA National Administrative Council. Abbott has been a panelist and presenter at numerous NAIA and NACDA conventions.

“Any recognition for my service as Athletic Director is really recognition for our administrative staff, coaches, and student-athletes,” Abbott said. ”They continue to work hard every day to earn success and their achievements reflect the commitment that Oklahoma City University has to pursuing excellence in every endeavor.  I’m thrilled to represent OCU and the Sooner Athletic Conference and am grateful for this honor.”

Abbott has worked in Athletic and Higher Education Administration for the past 25 years, including a previous stint at OCU as Assistant Athletic Director from 1991-1994. Abbott earned a Master of Science degree in sports administration from the University of Oklahoma and bachelor’s degrees in business administration and physical education from Huntingdon (Ala.) College. Abbott and his wife Annetta have two children (Kyle, 21, and Katelyn, 16).