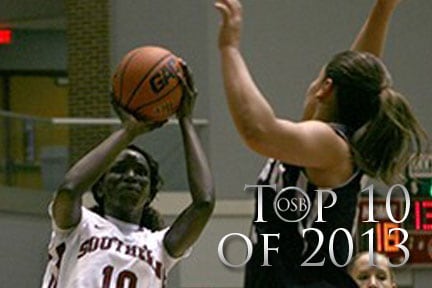 Southern Nazarene is winding down the transitional process from NAIA to NCAA Division II.  Along the way, the Crimson Storm has been in postseason exile.

But not as far as the NCCAA is concerned.

SNU competed in the National Christian College Athletics Association’s national postseason tournament in March.  The competition level was very high with not only NAIA schools, but also other Division II schools in the mix.

The Crimson Storm came away with the national title, its eighth in program history.  The previous seven came in the NAIA.

Southern Nazarene fell in the NCCAA Central Region tournament final, 73-64, to rival Oklahoma Christian.  The loss halted a 10-game winning streak, but not the season.  SNU was allowed to move on, receiving an at-large bid to the national level.

The next winning streak would need to be only three.

Five players scored in double figures for the Crimson Storm – the national field’s No. 4 seed – who dispatched Shorter, 79-49, in the opening round.

SNU next faced Union (Tenn.) in the semifinals, a team it had faced twice before in NAIA title contests.  The game lived up to any high billing, in fact needing an extra session, and SNU edged Union, 68-67, in overtime.

Storm sophomore Aminata Fall had an impressive double-double in the win.  She put in a career-high 30 points to go with 16 rebounds.

Two days later, SNU earned the title with a 74-72 victory over California Baptist.

Seniors Annie Kassongo and Oumoul Thiam came up big in the championship game.  Thiam had 18 points on timely baskets and Kassongo’s double-double included 11 boards and a career-high 23 points.

Head coach Derek Dorris was not only appreciative of what his team was able to do, but also excited for them.

“I’m just happy for the girls,” Dorris said.  “What a great accomplishment for them.

“They’ve been through so much transition, going from NAIA to Division II with all of the rule changes and a new coaching staff.  I’m just elated for them that they can call themselves national champions.  It speaks to the resolve of our team.”