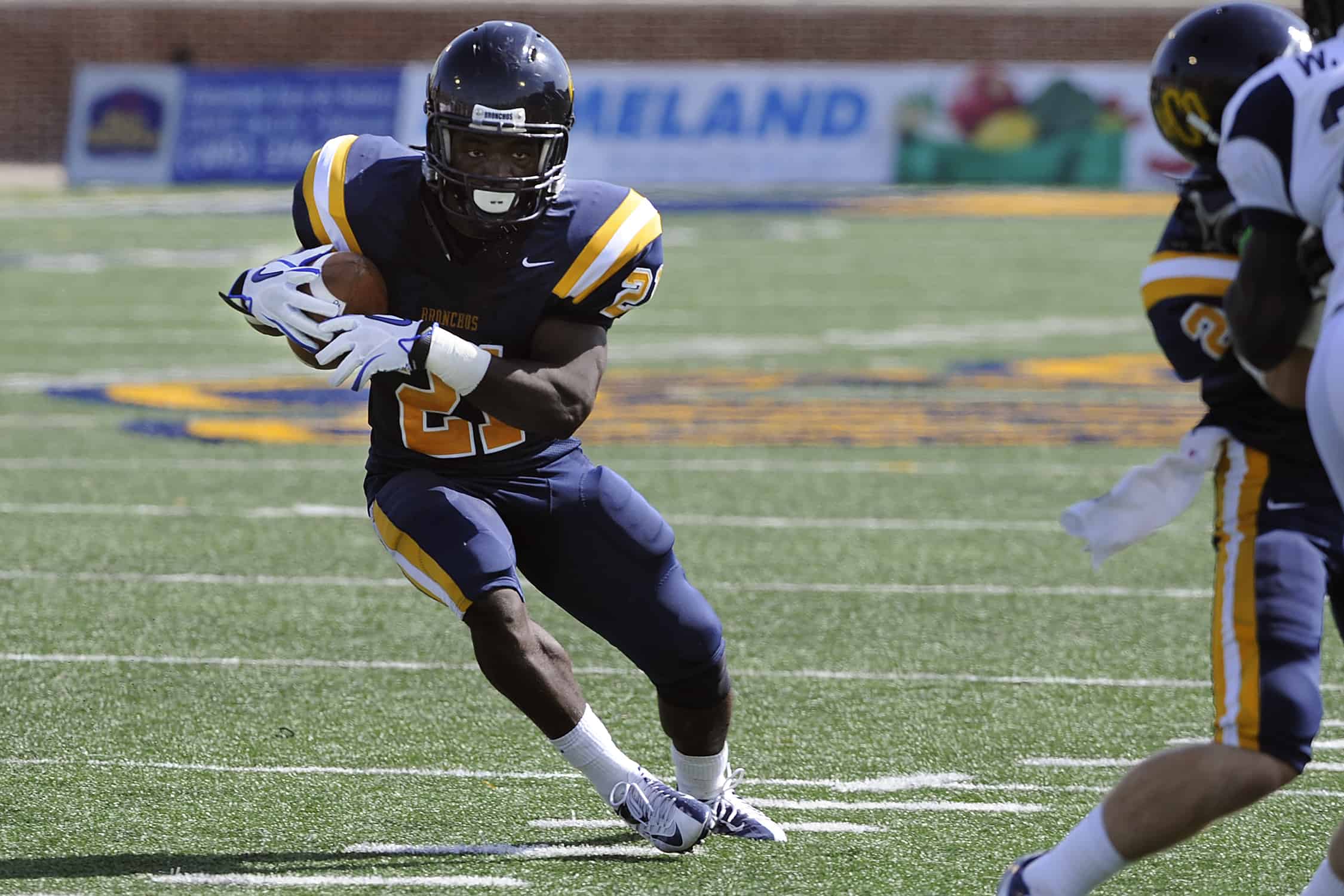 The season is almost here!  Let’s look at some players that could have a big impact for teams around the state in 2013.

Birmingham rushed for 1,703 yards and 13 TDs in 2012 on his way to an All-MIAA first team selection to go with a second team All-Region pick.  He’s currently fifth on UCO’s all-time rushing leader board.

There’s no reason to think he won’t make a push for the top spot on that list, needing only 1,156 yards to get there.  Opponents know he’s coming, but he still picked up more than five yards per carry last season.  He’s also a threat returning kickoffs for the Bronchos.

Senior leadership will be big for the Aggie defense and Brewster can bring that.  He is one the leading tacklers returning to Goodwell on a defense that is making improvements this season.  Brewster also garnered preseason All-America honors.

Gaines led the Great American Conference in interceptions in 2012 with seven, while grabbing 63 tackles and three break-ups.  He earned first-team All-GAC honors and was a second-team All-Region pick.  He is a versatile player that rushed for more than 1,000 yards while playing on the other side of the ball in junior college, whose leadership will be valuable for a Tigers’ team ready to step into the upper ranks of the GAC.

Grauer has been entrusted to take the helm of a program that has not been on the field in more than seven decades.  He led Lincoln Christian to a Class 2A State Championship in 2009, but hasn’t seen the field much since then.  He redshirted in 2010 and suited up for Missouri Western in 2011.  Since transferring to OBU, Grauer has been battling for this position and practicing through more than a year of offseason.  How he plays will likely determine much for the success of the Bison this year.

In his junior year, Hicks is no longer a secret.  He burst onto the scene in 2011, being named an NAIA All-American and recording a school record 136 tackles for the season.  He had 29 tackles-for-loss and returned to two interceptions for touchdowns.  He had 90 more tackles in 2012.  Hicks will lead a very experienced linebacker group and defensive unit into 2013 for a Crimson Storm team that needs to have a defense to shine with a full GAC schedule.

Jones was 10th in Division II and led the MIAA with 11 tackles per games last year with a pair of sacks and an interception to go with it.  There is a lot of strength in the NSU linebacking corps and Jones brings it each game.  Jones was also given preseason All-American honors.

Is there any position more scrutinized in the state than the one Knight just claimed?  The redshirt freshman from San Antonio received a lot of hype in his recruitment and has been named the starter over a veteran proven to put up points for the Sooners inside the red zone.  He passed for more than 2,000 yards and 27 TDs with only three interceptions in his senior year at Reagan High School.

Liggins closed out 2012 with a bang, putting 200 yards on Arkansas-Monticello in the season finale.  But that performance will be tough to repeat for an entire schedule.  He’ll have a strong line to run behind, though, as the very young line of last season is now made up of experienced veterans.  He may be a go-to often as this season the Rangers are breaking in a new quarterback as well as a host of new receivers.

McCoy spent time last season in the shadow of Tyler Thomas, the 2012 CSFL Offensive Player of the Year.  Even so, McCoy had 437 yards rushing and six TDs.  But now it’s his turn to step it up.  If he can make it through the spirited battles in camp to take the featured spot, he’ll have the opportunity to put up big numbers in the tough Warrior offense.

Defense has been big in Langston under head coach Dwone Sanders, who has spent the pat two seasons as its defensive coordinator.  And Ross has flourished under his tutelage.  He has garnered second-team All-America honors coming into what promises to be a big season for the Lions.  He was second on the team in 2012 in tackles (53) and also tallied a sack and three picks.

Like Langston, a revved up defense could make a difference for the Savage Storm this season.  Russell brings a tenacity and desire to win to the table as well as senior leadership, a phrase that is sometimes watered down, but not in this case.  The Storm has been filling roster gaps through the offseason, so expect the numbers for Russell to rise in 2013.  Although, the intangible qualities the linebacker possess may be what makes the biggest impact for SOSU.

Big name receivers racking up big yardage has become commonplace in Stillwater in recent years.  Stewart could be the next name being heard with frequency on the national sports shows.  He is a preseason first-team All-Big 12 selection and on the watch list for the Biletnikof Award.  Stewart topped 100 receptions in 2012 for more than 1,200 yards and is already in the top 10 in OSU history in both of those categories.

A former walk-on to the program, Walker is set to be the featured back for the Bulldogs this season.  He carried the ball for 333 yards with four TDs before being sidelined with an injury and has the potential to break the 1,000-yard mark this season.  He brings leadership to the backfield and well as strength and speed.  If the Bulldogs’ receivers show improvement as well in 2013, that will open the door for more opportunities for Walker to shine.

Watts is part of the Golden Hurricane tandem in the backfield, along with Ja’Terian Douglas, that both started in 2012.  He is in the top 10 on the all-time Tulsa career rushing chart with 2,186 yards on the ground and picks them up at a pace of more than five yards per carry.  He was the MVP of the Conference USA championship game last season with a 54-yard punt return for a TD to tie the game late.  Watts will be a part of Tulsa’s final C-USA run.