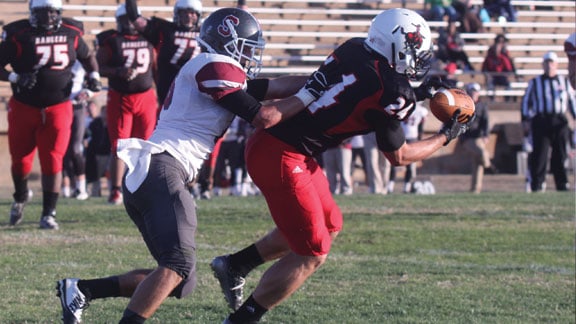 Northwestern's Justin Schanbacher will have plenty of opportunities to run and catch the ball for the Rangers in 2015. Photo provided by NWOSU Sports Info.

The football season that is just more than two months away. OklahomaSports.Net has a look at 15 of the players to watch in 2015 throughout the Oklahoma college ranks.

Barnes is one part of the two-headed beast in the backfield for the Bison. Along with Dawson Myers, the two combined for 1,858 yards and 24 rushing touchdowns. Barnes is a workhorse at 5-10, 190 pounds and strong, and he crossed the 1,000-yard plateau (1,028) in 2014. OBU will need his skill and power, along with Myers, to navigate its first season with a Division II schedule.

Yes, that position beside Bond’s name is right. The senior is making the move from quarterback to free safety for his final campaign and the Tigers’ coaches are not only comfortable with it, but also excited. He shined this spring at the new position. ECU fans know Bond can pass and run well, but he is an incredible athlete who can cover the field well and is smart in his play. The former QB looks to make life difficult for current GAC quarterbacks in the fall.

Booty is the leading returning rusher for the Golden Norsemen and has the potential to be one of the best running backs in the Southwest Junior College Football Conference. The sophomore from Jenks has proven speed as the Class 6A 100m state champion in 2014.

Head coach Dwone Sanders will always field a strong defense, and Brown will be an anchor for that unit in 2015. Last year, Brown had 33 tackles, including 9.0 tackles for loss and 5.5 sacks. The 6-5, 250 pound senior brings an intimidating presence to the Lions’ defensive line.

It is set to be a fast-paced offense for the Golden Hurricane under new head coach Phillip Montgomery and Evans looks to be at the heart of it. Tulsa was able to gain yards last season, but struggled converting that into points in its first season in the American. The junior quarterback has a strong arm and strong receiving corps to get the ball to and if he can limit interceptions, has a promising year ahead. 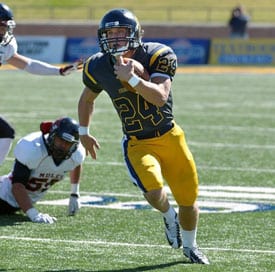 Gandara was a huge part of the Bronchos’ offense as a sophomore, crossing the 1,000-yard mark (1,121), picking up 5.8 yards per carry and running for 13 touchdowns. UCO won eight games in 2014, matching the win total for the previous four years. Gandara and the Bronchos go into this season with the target on their backs looking to match and exceed last year’s success.

Because of an injury, the senior played in only six games in 2014, but still had 39 tackles and 4.5 tackles for loss. George will be a leader on this Bulldog defense that will look a little different than last year, but should still be strong. If he is healthy all season, look to see his name with postseason honors.

Southern Nazarene has had offensive struggles of late. But this year brings a new coach, possibly a new quarterback and running backs, and a new feel. However, for the offense to get going, it will depend on what goes on with the offensive line. House can lead the way. He was an All-GAC player as well as a National Football Foundation Player of the Year in 2014.

Earlier this summer, we called McClendon the state’s best-kept secret in college football. McClendon has rushed for more than 2,000 yards during the last two seasons and the senior has the skill to top last season’s mark of 1,170 rushing yards and grab the attention of those who can get him to the next level. Additionally, the senior builds the rushing stats with a strong teammate in the backfield as well (Rob Moore) and picking up yards via receptions.

The biggest question is how Perine follows up his freshman year. He already owns the Division I single game rushing mark of 427 yards (Is he still running over and past Jayhawk defenders?) But he should have incentive for 2015, because in the bowl game against Clemson, he was held to just 134 yards – just? – and kept out of the end zone. With biceps as big around as telephone poles and determination, this year could be even bigger. 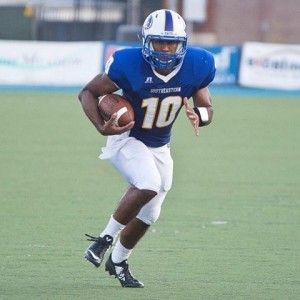 Polite supplanted a 2,000-yard passer to take the starting job last year and led the Savage Storm to their most wins (7) in five years, throwing for 19 touchdowns and more than 2,600 yards. Polite is quick as well as mobile and with the strong passing arm is still a threat to pick up big gains on a keeper at almost any point.

Powell led the RiverHawks in receiving yards (728) and receiving touchdowns (5) in 2014. But this was a team still finding its legs under first-year coach, Rob Robinson. NSU looks to come back stronger this season and have players stay healthy in the backfield, and with that Powell could shine as a receiver. However, the senior is multifaceted and has the skill to run the ball and even punt, if called upon.

The last time OSU fans knew in the spring the starting quarterback for the fall, Brandon Weeden was still wearing orange and black (and whatever other combination of gray and white). Rudolph played in only three games in 2014, but those included a come-from-behind win in Norman over OU and a 299-yard passing output with two touchdowns in a bowl win over Washington. Losing Rudoplh’s redshirt that far into the season was likely worth it to really see the QB the Cowboys have.

Things are different in Alva coming into 2015. With new head coach and NWOSU alum Matt Walter back in town, he is looking to see big things from the tight end position and Schanbacher brings that and beyond. The senior caught 20 passes last season, a number that should go up this year, but his running skills will also be on display, as he may line up in more than one spot.

Tausaga was a first team All-CSFL player in 2014 and should fit very well in the offensive system of Bacone’s new coach, Lawrence Livingston, which involves power looks as well as counter plays. He can pull and trap well and led the team last year in pancake blocks.