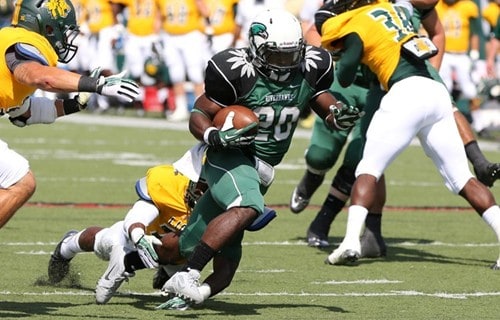 The college football season starts in Oklahoma in two months and it’s time to start talking about what’s in store.  (Really, is there ever not a time to talk about college football?)
Here’s a look at some of the players that could have a big impact for their teams in 2014.

The senior comes into his final season bringing All-GAC First Team and Don Hansen All-Super Region Three third team accolades from 2013.  Benton will draw a lot of attention to himself on the Bulldogs’ defensive line, leaving opposing offenses to choose to double- or triple-team him and allow others to come through or to chance a one-on-one matchup.  Tough choice.

Black played in only seven games for the Tigers in 2013, due to an injury, but grabbed three interceptions and returned one for a touchdown in that time.  He was named to the All-GAC first team in 2013, and with the graduation of fellow All-GAC first teamer Fred Gaines from a talented secondary, Black will play a key role in the Tiger defense.  He is also instrumental in the special teams as a kick and punt returner.

Chapman gained 1,078 yards receiving in 2013, averaging just less than 100 yards per game.  He picked up 213 yards on nine receptions and had two touchdowns in a big late-season win over Oklahoma Baptist.  The senior is a solid target and his stability in the position will be important to the new Bacone quarterback this season, as both of last year’s signal callers that split time for the Warriors have graduated.

Last season, Clark began rewriting the UCO record book.  He notched a school record 82 receptions for 1,348 yards and with rushing and return yardage, he recorded 2,249 all-purpose yards, which is also a Broncho record.  Clark was named a first team All-American by D2Football.com.  The target on his back in 2014 will be big and likely bigger still with the graduation of star running back Joshua Birmingham, but it looks like Clark can shoulder the load.

Gilbert led the team in tackles as a freshman in 2013 and was tabbed the CSFL Defensive Player of the Week following the final two contests of the season.  Gilbert also recorded an amazing 16 sacks as well as 27.5 tackles for loss.  The OBU defense performed well in the spring game, and Gilbert and that defensive unit could be a big factor for the Bison to have a winning record in the program’s second season back.

Hemberger missed the final two games of the season and still finished as the Rangers’ second leading tackler.  He had seven sacks and two interceptions on his way to being named honorable mention All-GAC.  Hemberger, in his first season in Alva after transferring from Garden City Community College, has been recognized in the off-season for his leadership in the classroom and community. The Rangers will need that leadership on the field as the NWOSU defense last year gave up more than 45 points per game.

Holbrook ended his junior campaign with a bang, throwing five touchdown passes and rushing for another against Oklahoma Baptist.  If he can carry that momentum into 2014, the Aggies could be on their way to the program’s first winning season since 2010.  He has an able receiving corps and versatile running backs in Justin Fogle and Chris McClendon that can grab the short passes over the middle as well.  And Holbrook can run, too.

We went with Knight last season and there’s no reason not to go with him again.  The Sugar Bowl MVP threw for 348 yards and four touchdowns against Alabama as the Sooners whipped the Tide, 45-31.  The passing game is all but a given with Knight, but he was quietly the team’s third leading rusher last season as well.  If he stays healthy the entire season, there might not be a ceiling on the Sooners’ dreams in ’14.

Lucas was the third leading receiver for the Golden Hurricane as a freshman.  He started in only five games in 2013, but became a dependable target as the season went on.  His versatility is a factor as well.  Lucas was also the third leading rusher on the team – those ahead of him (Trey Watts and Ja’Terian Douglas) are third and seventh on the all-time TU career rushing list.  And they have graduated.  The stage would seem to be open for Lucas to step into the spotlight.

At 6-foot-7 and 233 pounds, the quarterback has the opportunity to infuse new life into an offense that struggled last season.  Mauro, a transfer from Western Kentucky, played in only three games in his tenure as a Hilltopper, and those three were in 2012.  He was an All-Stater at Hurst H.S. (Texas) passing for more than 1,700 yards as a senior and could regain that rhythm in Bethany.

Rockmore went into 2013 heralded as a D-II preseason All-American by USA College Football.  However, a torn ACL in the second game of the season sent him to the sidelines for the remainder of the year.  (Rockmore still gained 145 rushing yards and had 217 all-purpose yards though suffering the injury in the third quarter of that game against Missouri Southern.)  Rockmore should get to share time in the backfield with Terrance Dixon, who took over the position after he went out, which will likely not diminish Rockmore’s performance, but could prove to enhance it.

Roland started the final seven games of 2013 and was the Cowboys’ leading rusher, with 219 yards on the ground coming against Iowa State.  That performance included four TD runs, also.  A solid running game will be big to open things up for whoever comes out the competition in the quarterback spot for OSU, and Roland is a strong and talented back who can do the job.  He led the Cowboys last season with 16 touchdowns scored.

Last year’s GAC Freshman of the Year picked up 1,119 yards rushing, which ties him for third on SOSU’s list for single-season rushing.  In his debut for the Savage Storm, Wortham rushed for 220 yards, a performance also in the top 10 for Southeastern in a single game, as SOSU upset Southern Arkansas, 56-50.  He is another sophomore that is already on opposition’s scouting reports.

With all the players that could see time in the Norse backfield, it is tough to not take the entire unit.  Under veteran coach Ryan Held in his first year in Miami, this year’s group is likely to continue gaining and scoring at a high pace.

The Lions have reasons to expect big things in 2014 with Wright at the helm.  He took over as the starter midway through the schedule last season and Langston closed the year on a six-game winning streak.  In those six games, Wright averaged 278.5 yards passing with nine TD passes to go with six touchdown carries, and was named CSFL Offensive Player of the Week three times.