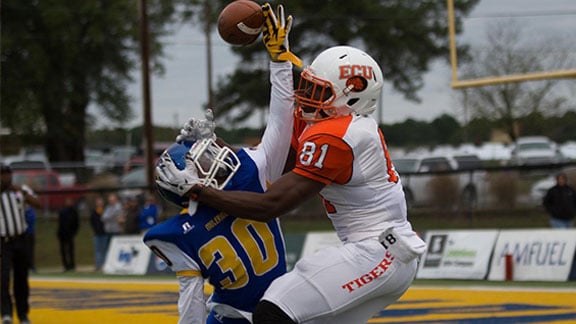 Suggested viewing for college football inside state lines in Oklahoma this fall.

Thursday, Sept. 1
Southern Arkansas at Southwestern
This one looks to be the best matchup on opening night. The Muleriders own a 4-1 series record and have an up-and-coming quarterback in sophomore Barrett Renner. That offense must match up with a Southwestern defense that righted the ship midway through the schedule in 2015, leading to six straight wins to close the regular season.

Thursday, Sept. 8
Pittsburg State at Central Oklahoma
Two of the top three winningest programs in Division II history take to the field on a Thursday night in Edmond. Prior to last season, it had been 49 years since UCO has gotten a win over the Gorillas, but the Bronchos took care of that in a big way, winning 49-31. PSU still leads the all-time series 8-4-1. It will be a great early season opportunity to see what the Broncho backfield of Jake Gandara and Clay McKenzie can do together.

Saturday, September 10
Trinity Valley at Northeastern A&M
To be the best, you have to beat the best. NEO hosts the defending conference champion and national runner-up Trinity Valley in the first home game of the season at Robertson Field. For additional intrigue, new NEO head coach Clay Patterson spent the past three seasons as the TVCC offensive coordinator. Should be a fun Saturday in Miami.

Saturday, September 17
Ohio State at Oklahoma
Football tradition. This may the biggest game circled on the calendar of any college football fan in Oklahoma as one to attend. It’s been nearly 40 years since the first matchup in 1977 in Columbus, a 29-28 classic OU win on a 41-yard field goal by Uwe von Schamman. Ohio State won the only other contest between the two, 24-14 in Norman in 1983. Oklahoma looks to be on the rise, while Ohio State will be replacing some key components. But still, this is Oklahoma and Ohio State. Definitely on the list of must-watch games.

Saturday, September 24
Henderson State at Southwestern
These two finished at the top of the standings in the GAC in ’15, and should be favored to be back at the top again this year. HSU is coming off another playoff appearance and brings a lot of strength back. SWOSU was also in the postseason last year, in the Live United Bowl, and should be able to build on an offense that showed brilliance at times, but needs to be consistent. The Reddies own a 5-2 series lead and won the last four.

Saturday, October 1
Texas at Oklahoma State
The Cowboys have won three straight over the Longhorns in Austin. But this game will be in Stillwater, where the Longhorns have won eight of nine all-time. And UT likely won’t have forgotten how last season’s game ended with a mishandled snap on a punt, which gave OSU favorable field position for Ben Grogan to put in his second field goal in the final two minutes and allowed the Cowboys to escape with a 30-27 victory. An Oklahoma State victory at Boone Pickens Stadium at this point in the season would go far for a team that looks to contend for the Big 12 title.

Texas A&M-Commerce at Panhandle State
Another Texas team crosses the border to the north as the Lions visit the panhandle for the Aggies’ first home game of the year, one of only four in 2016 at Carl Wooten Field. It is also the first home conference game for Oklahoma Panhandle, which this season has a full Lone Star Conference schedule for football. Commerce has three straight seasons with seven or more wins and trips to the postseason. With the new conference affiliation, OPSU is looking to put itself in position to make the postseason as well.

Friday, October 7
SMU at Tulsa
Friday nights in Tulsa are usually reserved for high school football. Especially with the likes of Jenks and Union in the area. But this one could be a fun one at Chapman Stadium. This will be the first American conference game for the Golden Hurricane, looking to rebound from a season of “almost” in 2015. TU won 40-31 last year over SMU and owns a narrow 6-5 advantage over the Mustangs at home. The passing game could be key as Tulsa finished 11th the country last year with the air attack and SMU was 70th in Division I in passing yards allowed.

Saturday, October 8
Emporia State at Northeastern State
The RiverHawks have a challenging portion of the MIAA schedule right in the middle of the season as Emporia State comes to Doc Wadley Stadium. Coach Rob Robinson is heading into his third season and rebuilding NSU to be stronger in all facets of the game. The RiverHawks lead this series 7-5-1 and the Hornets will by this point in the season know more about the new quarterback who replaced Brent Wilson.

Northwest Missouri State at Central Oklahoma
Coach Nick Bobeck has built this program back to prominence and the Bronchos have 15 wins and two postseason trips in the last two seasons. However, UCO hasn’t been able to take down perennial power Northwest Missouri in these past two years and last season’s 23-16 loss to the Bearcats, in which the Bronchos held sway for much of the game had to sting. Back in Wantland Stadium for this year’s contest, if UCO can limit turnovers it could be an exciting afternoon for Broncho fans.

Saturday, October 15
Bacone at Langston
The interim tag was removed from Langston coach Quinton Morgan’s title in the offseason comes into 2016 as the head coach. Among the faces he’ll see on the Bacone sideline under head coach Lawrence Livingston are former LU coaches in the Warriors’ OC Darryl Mason and DC Hank Campbell. The Lions have won nine of the last 10, but the Warriors should come into Anderson Stadium on a mission. Can the Warriors stop the Lions’ dual threat at the QB position in Wright and Ralph?

Saturday, October 22
Arkansas Tech at Southeastern
The battles between these two have been interesting of late, from the emergence of a stellar Wonder Boy backfield in last year’s 57-37 romp to the solid Storm defense in a 22-5 win for Southeastern the year before. Tech leads the series 11-4, and both teams are trying to make the move from the middle of the GAC pack to the upper echelon of the league.

Saturday, October 29
Ouachita at Oklahoma Baptist
Although Ouachita athletics has officially been branded as such lately, there is still an implied battle of the “OBU’s”, allowing Baptists in both states to be divided in the stands, if not in spirit. The Bison are starting to get the feel for the Division II game, while the Tigers would like to get back to the top of the league mountain where they were in ’14.

Saturday, November 5
Southern Arkansas at East Central
The series, led by SAU 10-7, has gone back and forth of late, with the home team winning the last three. This one is in Ada. Defense is usually a big key for the Tigers, but it was the Muleriders that scored on a fumble recovery and an interception last year in Magnolia. There have been plenty of points scored between the two in the last three years as well, so the ECU offense will need to be at a late season performance level for this first weekend in November.

Saturday, November 12
Northeastern State at Central Oklahoma
Pick a rivalry game this weekend – there are plenty out there. We’re going with the President’s Cup this year. NSU at UCO. This one has been as tight as it can be for the past 18 contests, with each winning nine. Both programs look to be improving, although UCO is right now farther up that ladder. The game is again on the final week of the regular season where it belongs. The NSU defense will have its hands full with an offense that is multifaceted, but a timely turnover here and there could serve the RiverHawks well.

Saturday, December 3
Oklahoma State at Oklahoma
Bedlam.
The last trip to Norman resulted for Oklahoma State in what Dave Hunziker called in his radio broadcast, “a Christmas miracle.” Don’t expect a second punt in 2016. The Big 12 title could be on the line in the last season without a conference title game. Baker Mayfield’s candidacy for the Heisman will likely be a story line and once again there could be major ramifications for the College Football Playoff.
Again, it’s Bedlam. There’s not a lot more that needs to be added.