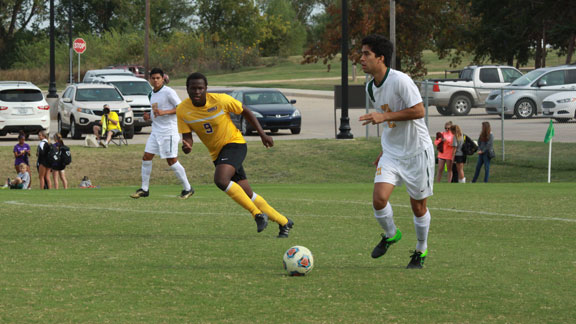 Following the departures of Mark McGrath and Mark Dunleavy, St. Gregory’s has a massive hole to fill in the middle of the park in 2016. Arvizo tallied a goal and an assist a season ago, and the Cavaliers may lean heavily on him to produce more entering a season in which they’ll look to do better than the two wins in SAC play the squad earned last year.

Breadman burst onto the scene last year, scoring 12 goals in 22 appearances for the Drovers. With leading men Stephen Owusu and Liam Madden departed due to graduation, Breadman will start the season alone in the spotlight.

Campbell earned First Team All-SAC honors last season after tallying a team-best 17 goals to go along with four assists. His chemistry with Igor Stojanovic should proper the Eagles to new heights in 2016 after finishing fourth in the SAC last year.

Castillo was a First Team All-Great American Conference selection in 2015 after firing home 12 goals and handing out six assists for the Bison. The Bison almost ascended to the top of the GAC men’s soccer summit last season, and Castillo played a large role in that, accounting for just over 40 percent of the team’s goals.

Estrada turned in enough impressive shifts as a defender or defensive midfielder that he earned the GAC Defender of the Year award. Starting in 17 matches in 2015, Estrada looks set for another massive season for the Bison in 2016.

Flores owns the most experience of any returning Eagle defender after earning 17 starts out of 18 matches in 2015. Adding to his value as a player was his ability to double as a midfielder, and Flores combined for a goal and four assists in his dual roles. He’ll need to make the leap if OC is to experience better days in the Heartland Conference.

Gammill was honored as the inaugural OklahomaSports.Net Goalkeeper of the Year in 2015 following a stellar season in which he held a .83 goals-against average in over 1500 minutes of action between the posts. The Hillcats racked up 10 wins last season, and Gammill’s play went a long way to helping RSU to that mark.

Oklahoma City’s Serbian-born keeper earned the Sooner Athletic Conference’s Goalkeeper of the Year award last year after posting a 1.83 GAA. With a defensive unit that graduated just one senior last year, look for that average to go down this season as the entire defense continues to gel.

On a squad that tallied just three wins in 2015, Lawrence is a strong returner that could help the Crimson Storm to more wins this year. The speedy defender was on the All-GAC Second Team as a junior and was honorable mention All-MIAA as a redshirt sophomore.

There wasn’t much to enjoy about Bacone men’s soccer last season; the squad went 0-9 in the Sooner Athetlic Conference. However, McGroary earned valuable minutes as a freshman while notching a team-leading five assists. He’ll need to produce on both ends if the Warriors want to escape the SAC basement.

Neri tied for the team-lead with 12 goals in 2015 for the Evangels. With running mate Raphael Bonelle graduated, Neri will need to produce another season like last year in order to help MACU get back into SAC contention.

Reed started 17 of 18 games for a dominant Northeastern State team that finished second in the regular season of the Mid-America Intercollegiate Athletic Association in 2015. The midfielder notched nine goals, the most of any returning Riverhawk, while also dishing out one helper.

The Golden Eagles’ leading scorer a season ago, Rogers will be expect to do the heavy lifting again this year for Oral Roberts following the graduation of midfield maestros Edgardo Mira and Tarik Salkicic. A First Team All-Summit League selection a year ago, the senior will need to be firing on all cylinders if Oral Roberts hopes to return to the Summit League Championship.

The Golden Hurricane slipped a little last season despite reaching the second round of the NCAA Tournament, failing to reach the 10-win mark for the first time since 2011. Saari was the one pulling the strings for Tulsa last season to the tune of four assists in 18 starts. His production will need to take the next if Tulsa wants to where it’s accustomed to.

Stojanovic boasted one of the best goals-against averages in the state last season at just .58 to amass a 14-1-0 record. He posted seven shutouts in 2015, and will look to do that and more in the Eagles’ second season as part of the Kansas Collegiate Athletic Conference.

Zalad earned OSN Defender of the Year laurels last year after marshalling an Eagles backline that permitted a miserly 11 goals in 22 games. The defender will play a large part in securing Oklahoma Wesleyan amongst the elite of NAIA men’s soccer after the squad rose as high as No. 2 in the nation in 2015.