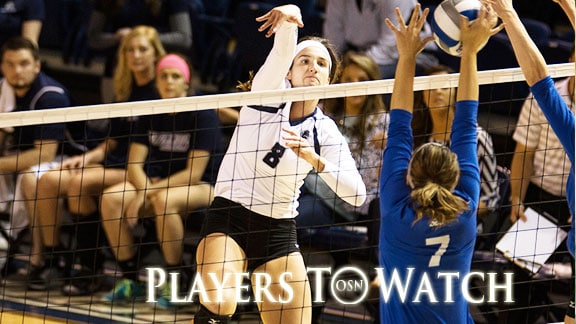 It was a good volleyball season in Oklahoma in 2015. Here are 16 players that could make it good again in 2016.

Alissa Benson, Southeastern, S, junior
Benson topped the 1,000-assist mark in just 108 sets and had a 9.33 assist per set average on the year. One of the ‘Killer B’s’ herself, Benson regularly finds Julia Benford, as well as Arianna Baker, Jessica Baker and Kristina Bergman. The Storm struggled early in the season on the road in 2015, but Benson is a consistent setter continuing to mature and will be instrumental for Southeastern to get a strong start this year.

Dani Chase, Oklahoma City, DS, junior
Chase was a defensive workhorse for the Stars in ’15, picking up 471 digs at 4.66 per set. With seven seniors from last season gone, Chase, a Second Team All-SAC performer, is one of seven now-juniors to have an upperclassmen presence on the court to help the Stars move on to the next level, as the win total has improved year-to-year in each of the last four seasons.

Laurel Church, Mid-America Christian, MB, junior
Church led the team in kills last year, but she was surrounded by four solid seniors with her on the court. It’s a younger group with her now, and she may be a focal point. Church was an honorable mention All-SAC player in 2015.

Katy Davis, Central, S, junior
Last year was one to remember for the Bronchos. And although Barbara Jackson has graduated, key pieces to the UCO puzzle remain in place for another run. The defending MIAA champions return Katy Davis for her senior year. Davis led the MIAA with 1,444 assists and average of 11.84 per set, which was ninth in Division II. She was also third on the team in digs (271). Davis helped the Bronchos to a No. 12 ranking in the final poll and was a First Team All-MIAA and First Team All-Region, as well as First Team Academic All-American.

Nicole Fleitman, Oklahoma Baptist, MH, sophomore
The Lady Bison lose a lot of defense in the middle with the graduation of Cat Roth, who finished last year with 972 digs, an NCAA Division II single-season record. Fleitman will have an opportunity to dil the spot in the middle. The sophomore was used more last season in attack mode, hitting .216 on the year with 207 kills.

Madyson Gill, East Central, OH, junior
The Tigers program will have a different feel in 2016. It starts at the top with new head coach Melissa Anderson. But among those returning to Ada is junior Madyson Gill. The ECU offense struggled at times in ’15, but Gill provided point production, leading the team at 3.23 per set. She also had an ECU-high 226 kills.

Jenna Gillean, Cameron, MH/OH, sophomore
There were more freshmen on last year’s Cameron roster than you can shake a stick at, but leave the stick ready because it’s another large incoming freshman class again in Lawton. A sophomore now, Gillean will be one of the more experienced players on the team. She showed all-around skills and can be used in multiple spots on the rotation. She hit .275 last year with 281 kills, second on the team, but also had 84 blocks, tops in that CU category. Gillean was the LSC Freshman of the Year and grabbed a spot on the conference All-Tournament team, too.

Kayla Hebert, Southwestern, S, senior
In her first year at SWOSU after playing for two seasons at Cameron, Hebert helped her new squad to the best season in program history. A two-time GAC Setter of the Week, Hebert totaled 1,149 assists (9.74 per set) in her junior season to go along with 383 digs, 130 kills and 51 service aces – a single-season school record. She was at her best down the stretch, being named the GAC Tournament MVP after SWOSU defeated Southern Arkansas to win their first-ever conference championship.

Emily Hollingsworth, Oklahoma Wesleyan, OH, junior
Hollingsworth had 515 kills in 2015 and averaged 3.86 points per set for the Lady Eagles and both numbers led the team. OKWU had 24 wins in 2015, but lost four of its last five. Hollingsworth, a First-Team All-KCAC player, has the skills and with an improved hitting percentage to go with those kills could lead the Lady Eagles to the top of the KCAC.

Laura Milos, Oral Roberts, OH, junior
The Golden Eagles have the chance for a big year in 2016. ORU returns six starters from 2015, including Milos, a First-Team All-Summit League performer. She was an All-Region player last year and was named Player of the Week five times. With 583 kills, 5.07 kills per set and 54 aces, she led her team and the league in all those categories. She had 20+ kills 19 times and 30+ twice in ’15. Fellow junior Lucija Bojanjac returns as well to make a powerful duo for the Golden Eagles.

Shaeli Munroe, Southwestern Christian, MB, senior
The Lady Eagles had some big moments and with seven seniors returning, the possibilities of success look good. Munroe may fill the role left with the graduation of Tory Sharp. Munroe was second on the team behind Sharp in kills (337) and kills per set (2.53) and led the team in hitting (.198) and ended the season with double-digits in kills in eight of the final 10 matches.

McKenna Qualls, Southern Nazarene, OH, senior
The Crimson Storm is bringing everyone back from the 2015 – there wasn’t a single senior on the roster. And that means one of the most athletic players in the GAC in Qualls is going to be on the court one more year in Bethany as well. Qualls fiercely attacks the net with her serves and led the league with 56 aces last year. She also led her team in kills at 2.66 per set. Qualls is one of five seniors on the team that has the skill to make a postseason run.

Manon Soraru, Oklahoma City, MB, junior
The 2015 SAC Newcomer of the Year is another of the seven juniors on the squad for OCU. Soraru hit .370 with 283 kills last year – both numbers second on the team behind only SAC Hitter of the Year Tori Leisure – and looks to only improve coming into the new season.

Jordan Spence, Central, MH, sophomore
Spence led the Bronchos in blocks last year, with 124 on the season and averaging 1.02 per set – a pretty good stat for Coach Miraku to know that it is a given that Spence will get at least one block each time the team takes the court for a set. The sophomore will also be called upon offensive this year. She hit a team-best .329, which was also third in the MIAA, and was on the First Team All-MIAA.

Nora To’omalatai, Northwestern, OH, senior
To’omalatai is part of a strong senior class that could help the Rangers get over the hump and move into the upper portion of the GAC. She led her team in kills at a pace of 3.24 per set and was also strong on defense recording 214 digs. Along with fellow outside and senior, Asia Pipkin, the Rangers look to build on the momentum picked up in the second half of 2015.

Carly Zak, Southwestern, OH, senior
A three-time All-Great American Conference selection, Zak has been a dominant force in Weatherford during her time with the Bulldogs. Last season, she was fourth in the GAC with 446 kills (3.72 per set) while hitting a career-best .237 to lead her team to the best season in program history, which was capped off with a GAC Tournament Championship and berth in the NCAA Division II Volleyball Championships. Zak set the all-time kills record (1,157) at SWOSU as a junior and looks to continue making history during her senior season.