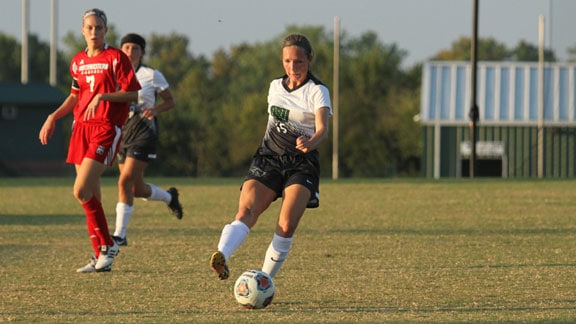 The collegiate soccer season is just around the corner! Continuing our series of 16 players to watch in 2016, here are some names it would do well to pay attention to once the season kicks off.

Courtney Flores, Southwestern, Goalie, senior
The reigning Great American Conference and OklahomaSports.Net Goalkeeper of the Year, Flores returns for one last stint between the sticks in a record-setting career. Her play will be a big part of why SWOSU makes it back to the GAC Championship looking for a third conference title in five years.

Rhiannon Brewster, Science and Arts, Defender, senior
Brewster earned OSN Defender of the Year honors after leading a backline that permitted just 21 goals in 21 games in 2015. The senior also played an integral part on offense, tying for a team-high seven assists. Production on both sides of the ball will be paramount in the Drovers’ quest to repeat as Sooner Athletic Conference champions.

Courtney Dike, Oklahoma State, Forward, senior
A Women’s World Cup participant as a member of the Nigerian Women’s National Team, as well as the first-ever Oklahoman, man or woman, to play in a World Cup, Dike returns for her final season at Oklahoma State this fall. The senior led the team with 17 points off five goals and seven assists on the way to All-Big 12 Second Team honors in 2015 and a Big 12 Tournament appearance.

Kentia Kokis, Central, Midfielder, sophomore
In her first season with the Bronchos, Kokis burst onto the scene with eight goals, the second-highest tally on the squad. In a midfield that is returning just two upperclassmen, Kokis’ will need to avoid a sophomore slump.

Kelsey Leveling, Northwestern, Forward, senior
Performances were dreadful for Craig Liddell in his first season at the helm in Alva as his team scored just four goals last season. Will Leveling, the only returning forward with a goal to her credit last season, be able to lead an offensive renaissance for the Rangers in Liddell’s second term?

Sara Ricks, Oklahoma City, Midfielder, sophomore
Twenty-seven goals graduated for the Stars last season, and Ricks must now find a way to create chemistry with a new forward pairing. Whether she is able to do that or not will play a large part in whether Oklahoma City can knock off the defending champs from USAO.

Rubi Villegas Aguilar, Oklahoma Christian, Forward, sophomore
Accounting for over half of the Lady Eagles’ goals last season, Aguilar returns for her sophomore season looking to get Oklahoma Christian back among the leading lights of the Heartland Conference. OC returns much of their roster from last year after only graduating four, so the chemistry should be there for Aguilar to run rampant.

Rachel Ressler, Oklahoma, Defender, senior
One of two defenders for the Sooners to see the field every game, Ressler returns to Norman in her final season looking to further elevate an Oklahoma program that enjoyed its best season since 2012 when it went .500 in conference play. The All-Big 12 Second Team selection helped limit opponents to a paltry .85 goals per game in 2015.

Tayler Stover, Rogers State, Goalie, sophomore
Stover started all but one match of her rookie campaign for the Hillcats, earning the lone win of RSU’s season. Despite a 3.58 goals-against average, she posted 110 saves and a .663 save percentage. If Rogers State suffers a similar season this year, it won’t be a result of this sophomore’s stellar play.

Kylee Bertrand, Southwestern, Defender, sophomore
The name Bertrand is no stranger to the SWOSU faithful thanks to Kira, and younger sister Kylee has picked off where her older sister left off. An All-Central Region selection as a freshman, Bertrand marshalled a backline that posted a GAC season-record 10 shutouts. Look for more steady production from her as a young defensive front gains another year of maturity.

Kenzi Bice, Oklahoma Baptist, Defender, senior
Bice never missed a start last season for the Lady Bison, and will hope that first year of experience in the GAC will help her lead a seasoned defensive unit in 2016. The defender also chipped in on the offensive side of the ball with a goal and two assists, while never once receiving a yellow card.

Kelsi Bussert, Southern Nazarene, Midfielder, sophomore
Bussert was a bright spot on a Crimson Storm squad that limped into the GAC Tournament last fall. She accounted for nearly a third of SNU’s goal tally last season with six to her credit, including three game-winners. How well she connects with fellow midfield running mate Hannah Robinson will directly affect whether Southern Nazarene returns to the heights of 2014 when they won the GAC regular season crown.

Araceli Flores, St. Gregory’s, Forward, senior
On a team loaded with experience next year, Flores will be tasked with shouldering a heavy burden. The Cavaliers suffered a 1-8-0 record in SAC play last season, and the senior forward will be looking to fire SGU back into the upper echelons of the conference following an 11-goal season in 2015.

Anastasia Robinson, Northeastern, Forward, senior
One of the most prolific distributors in the country last season, Robinson returns to Tahlequah hoping to take the RiverHawks back to the Mid-America Intercollegiate Athletic Association Championship in 2015 to settle some unfinished business. The forward had a hand in 22 goals last year, and her 10 assists ranked her in the Top 12 in Division II.

Rachel Thun, Tulsa, Midfielder, junior
Tulsa’s leader in both goals (7) and assists (8) in 2015, Thun was a large part of why the Golden Hurricane defied expectations in the American Athletic Conference last season after the squad was originally picked seventh in the league. Tulsa graduated nine seniors last year, so Thun will also be called into an expanded leadership role.