No. 17 Stars capture SAC Championship with win over MACU softball 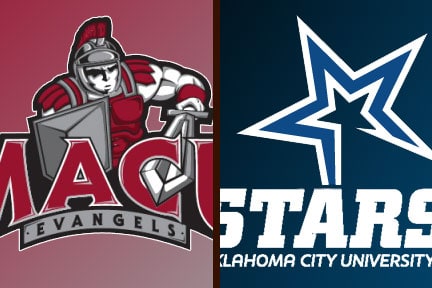 OKLAHOMA CITY – The No. 17-ranked Oklahoma City University Stars captured the Sooner Athletic Conference championship with a 8-0 win over the Mid-America Christian University Lady Evangels today (May 3) at Ann Lacy Stadium on the OCU campus.

Kelcie Wolf held the Stars scoreless in the first and the Lady Evangels had a golden opportunity in the bottom of the frame to jump on top, but a towering fly ball by Natalie Bissell was tracked down in front of the wall by Jamie Rateliff to end the threat.

Rateliff then made an impact with her bat by hitting a two-run homer in the second to give the Stars a 2-0 lead.

OCU added to the lead in the third when Jocelin Diaz hit a two-out RBI single.

The Stars continued to pull away and got a two-run homer from Maxime van Dalen and then a two-run single by Kyndra Holasek finished off a three-run sixth inning that put it away.

Wolf went 4 1/3 innings for the Lady Evangels with four runs allowed and three strikeouts, while Amber Tinney came in for 1 1/3 and also gave up four runs.  Ashley Sanford followed Tinney and got the final out of the sixth inning.