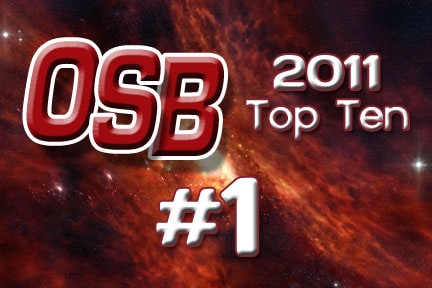 Yes, it is the top sports moment in Oklahoma from Aug. 1 to the end of 2011.  And though the game was a bit of a blowout, that’s not the reason.
No, it’s the sports moment of the year because it was a game that was shoved down our throats  for three solid months.  Don’t get me wrong, I was looking forward to Bedlam since the start of the season just like everyone else.  But the game started to acquire a life of its own long before the ramifications of its outcome would be known.
Sure, if both teams had come into the Dec. 3 contest undefeated, the game might have taken on mythical proportions.
But they didn’t.
What we got was an Oklahoma team that was limping in with two losses, an active roster that did not include Ryan Broyles or Dominic Whaley, and beatings in the media.  Oklahoma State meanwhile had been given 15 days to prepare while thinking about what might have been after a tough loss at Iowa State on the day the team and school would learn about the loss of two prominent figures in its athletic department.  One of the state’s major print publications wanted to give this game it own name to separate it from previous Bedlam incarnations.
In fact, the two teams had the exact same records they had coming into last year’s contest.
The game itself was dominated by the Cowboys on their home field.  OSU won 44-10.
Oklahoma never really got started; Oklahoma State scored the most points in a Bedlam game since 1945 and had the second largest margin of victory in the series.

In the end: the monkey was sent reeling off the back of Mike Gundy; Oklahoma found itself on the way to the Insight Bowl; and though it was just not quite enough to propel the Cowboys into the BCS title game, the win allowed OSU finish the regular season with a school record 11 wins, capture its first ever outright conference championship, and send the Pokes to their first-ever BCS bowl game.