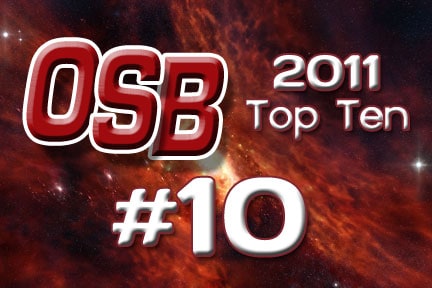 It seems as though there is some kind of federal mandate that sports sites and networks must produce Top Ten lists, and at the very least give one at the end of the year.  OK, I’m fine with that.
The Oklahoma Sports Blog list for 2011 will consist of top sports moments since we officially opened for business on Aug. 1.  Hope you enjoy.

Northeastern was involved in many exciting games throughout the 2011 season.  A person could definitely take his pick as to which one to choose to go on this list with three or four coming to mind right away.  Since we are going to talk about another one a little later on in this list, I’ll choose the NSU/ECU game back in September.
The Tigers got up by 10 points early on, but Northeastern just wouldn’t go away.  It was something of a hallmark for this team through the year.  When the Riverhawks scored twice in a five minute span in the fourth quarter to take their first lead of the ballgame, it looked like they might have their second win of the season.

But ECU’s senior quarterback Tyler Vanderzee led his team back, and with 35 seconds remaining in the game, connected with George Robbins for the tying score.
Vanderzee threw his fourth TD pass of the day to Phillip Pawelek and surpassed the 500-yard mark in passing yards with the scoring toss.
Northeastern State couldn’t answer in the extra period and East Central came away with a 45-38 win against its in-state rival.