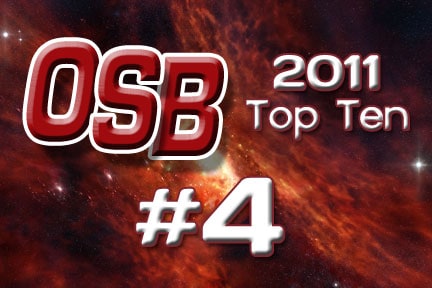 If Oklahoma State had lost at Texas A&M early in the season, it is likely this would have been just another season for the Cowboys.  But OSU did not lose.  And although the Cowboys found themselves down 20-3 at the half, they would not be denied on this day.
Oklahoma State defeated Texas A&M, 30-29, and allowed the Cowboys’ fan contingent that made the trip to College Station to chant “Big 12! Big 12!”  in the direction of the conference defectors.
Coach Gundy’s halftime speech must have been really effective, because OSU came out and opened the second half with an 80-yard drive for a touchdown.  That seven points was the first of 27 straight for the Cowboys to give them a 30-20 lead.  The OSU advantage might have been more, but a sure touchdown reception by Justin Blackmon was fumbled at the A&M 2-yard line and went out of the endzone for an Aggie touchback.
Oklahoma State’s defense really stepped it up in the second half, allowing only one A&M score, as the Aggies crept to within three at 30-27.  But on OSU’s final possession, the Cowboys ran off just enough clock and Blackmon ran the ball out of his own endzone as time expired to seal the win by the slimmest of margins.