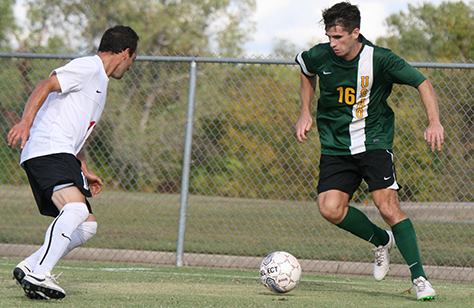 The All-OSN team is comprised of standouts from the NAIA and NCAA Division II men’s soccer teams throughout the state of Oklahoma. In total, there were a total of 14 NAIA selections and eight NCAA picks. Oklahoma Wesleyan led all teams with five honorees, while Northeastern State and Rogers State led all NCAA teams with three selections each.

Liam Madden orchestrated USAO’s attack from the heart of midfield as the Drovers claimed the Sooner Athletic Conference regular season title. The senior from Dumbarton, Scotland, led the SAC in points with 40 total after putting away career-high totals in goals (11) and assists (18). Five of his goals stood as game-winners as USAO went 9-0-0 in conference play and 16-2-0 overall.

Nemanja Zalad marshalled an Eagles defensive front that allowed just 10 goals in 18 matches in 2015. Hailing from Belgrade, Serbia, the junior defender was a vital part of 10 clean sheets for Oklahoma Wesleyan, while also chipping in with a goal and two assists, as the Eagles won the Kansas Collegiate Athletic Conference in their first year in the conference.

Cody Gammill put in a strong showing between the posts for Rogers State as the Hillcats finished third in the Heartland Conference in their second season competing at the Division II level. The sophomore from Frisco, Texas, collected five shutouts while giving up just 18 goals for the year. He also recorded 83 saves to finish his season with a 10-5-3 record.

Jamie Peterson directed Oklahoma Wesleyan to a first-ever KCAC title in the club’s first year in the conference since moving from the Midland Collegiate Athletic Conference last year. With Peterson at the helm, the Eagles have also risen to No. 2 in the NAIA Coaches Poll this year, the highest OKWU has ever ascended in the national poll. Peterson’s squad completed the regular season with a 16-1-0 record, including a perfect 10-0-0 mark against conference foes.