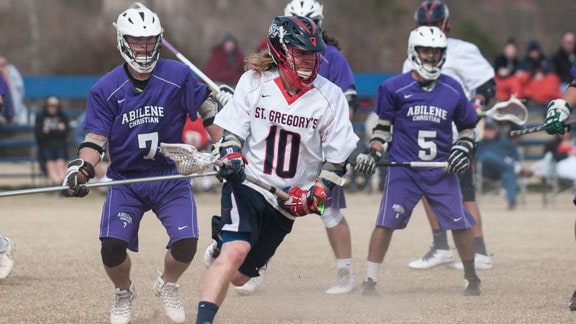 The All-OSN Lacrosse Team is comprised of the four men’s lacrosse teams that represent the state of Oklahoma. In total, there were 12 selections, and St. Gregory’s led all teams with six selections. Oklahoma State was second on the list with four, while the University of Oklahoma had two honorees and the University of Tulsa had one.

James Smith enjoyed another stellar season at attack for the Cavaliers. The All-American Honorable Mention a season ago, Smith is one of just three players in MCLA’s Division II that has scored 49 goals or more. Additionally, Smith dished out 14 helpers on the way to 63 points for the regular season.

The sophomore phenom is also the only men’s lacrosse player in the state to have received OSN College Player of the Week honors this season, and is a main reason the Cavs have risen as high as No. 9 in the NAIA’s inaugural polls.

No goalie has meant more to his team this season than Andrew Miller has to the Cowboys. He is peerless in MCLA Division II with 271 saves, two off the lead for the most saves in both divisions of the MCLA, and is averaging 20.9 saves per game to go along with a .686 save percentage. Miller’s play is also a major reason why the Pokes will have an opportunity to begin the defense of their Lone Star Alliance Division II title this coming weekend.

In his second season at the helm coach Seaman has directed an impressive Cavaliers squad that has outscored their opponents by 122 goals and seen their win total increase by three victories. His team has climbed as high as ninth in the NAIA Coaches’ Poll, clinching the No. 2 seed in the Kansas Collegiate Athletic Conference and an undefeated division record in the LSA Division II North. Seaman’s .692 winning percentage was the best among all four Oklahoma coaches.