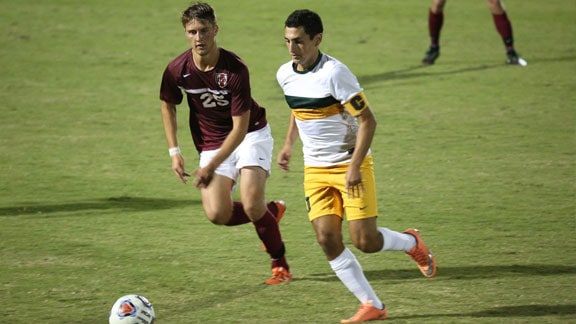 Teams are heading to their respective postseason tournaments this weekend, and with that comes the second annual All-OklahomaSports.Net Men’s Soccer Team.

Vicente Castillo has scored more goals than any player in the state this season, accounting for Great American Conference-leading 11 goals, while also notching five assists on the year. His goal tally this season accounts for nearly a quarter of Oklahoma Baptist’s total offensive output, and the senior forward from Peralta, Spain, is a large part of why the Bison have claimed their first regular season championship since 2010.

Chad Dennis started 16 of Southwestern Christian’s 17 matches this season, and in that time marshalled a defense that allowed just 17 goals and gave up 78 shots on goal. That sort of defensive display led the Eagles to a 6-1-2 record in the Sooner Athletic Conference, good for third place, and a 12-3-2 record overall. Not only did Dennis provide stout defense, but he also notched two goals and provided five assists.

Luka Stojanovic was stingy in goal for Oklahoma Wesleyan as the Eagles are in the midst of another memorable season in Bartlesville. The senior goalkeeper has logged over 1,500 minutes between the posts, allowing just four goals for a goals-against average of .23. He coupled that with 68 saves and a .919 save percentage. His play is a major reason for Oklahoma Welseyan going a perfect 11-0-0 against Kansas Collegiate Athletic Conference competition, and the Eagles are still undefeated going into the postseason with a 17-0-1 overall mark.

Anthony Yousey took over at Oklahoma Baptist prior to the 2013 season, and has been hard at work building a contender. After three straight losing seasons on Bison Hill, Yousey turned it around in 2016, directing Oklahoma Baptist to their first regular season title since 2010, and the club’s first since making the jump to NCAA Division II. The Bison are now poised to do the double as they get set to host the GAC Tournament in Shawnee this weekend.