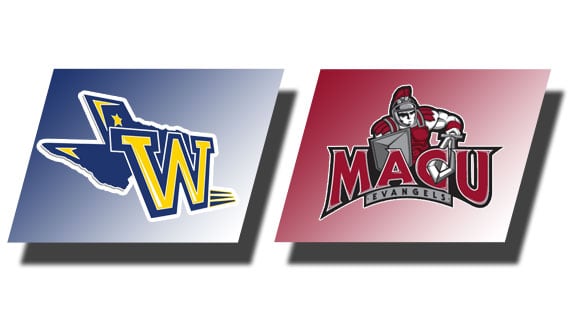 OKLAHOMA CITY – In a wild game that’s sure to conjure up pleasant memories for Mid-America Christian University fans, right down to the final score, the No. 10-ranked Evangels somehow pulled out a 100-99 victory overtime victory over the Wayland Baptist University Pioneers in a thrilling Sooner Athletic Conference game tonight (Jan. 12) inside the Gaulke Activity Center.

Similar to the NAIA National Championship victory, it was Malcolm Mann driving for the game-winning shot in the extra session.

Unlike the championship win, it didn’t come at the buzzer, which meant the Pioneers had one final crack at the win with 26 seconds left.

But a layup attempt by Ruben Lopez rolled around the rim and out with one second left, falling harmlessly into the hands of Ex’Zavia Seaton for his career-high tying 15th rebound and preserving the Evangels’ win.

“Our kids just played so hard,” MACU head coach Josh Gamblin said. “They hung in there and showed some real mental toughness”.

Mann’s game-winning shot capped a 6-0 run by the Evangels to finish overtime after Julian Pesava had given the Pioneers a five-point lead of 99-94 with 1:59 remaining.

That would be the last time the Pioneers would score, as the Evangels got the necessary defensive stops down the stretch to give them a chance to pull out the win.

Offensively, the Evangels got four crucial free-throws from Tyler Chaisson to pull within one with 46 seconds left in overtime.

Heading into the extra session, the Pioneers appeared to have the momentum after wiping out a five-point Evangel lead in the final 17 seconds of regulation.

Following a pair of free throws by Olajuwon Garner that put MACU up 90-85, Joshua Throns hit a three to pull the Pioneers within two with 11 seconds left.

The Evangels were then whistled for an offensive foul on the inbounds play and were then called for a defensive foul that led to two game-tying free-throws from Throns that sent the game to overtime.

The opening half was tight much of the way until the Pioneers edged out to a six point lead of 39-33 at the 2:51 mark.

But Garner got the Evangels right back in it with two free throws and then a pair of treys to help tie the score at 41-41.

After the Evangels fell behind by nine with 9:27 left in the second half, Devone Reed and Garner combined to score the next nine points of the game to force a 63-63 gridlock.

Maurice Redmond responded with a three to briefly put the Pioneers back in front, but Reed and Garner answered again by each hitting a three to give the Evangels a lead they wouldn’t relinquish until the final seconds of the half.

Reed and Garner each scored 25 points to lead the Evangels, who are now 12-5 overall and 3-2 in the SAC. The duo also combined to go 9-of-15 from beyond the arc.

Trey Slate scored 12 for the Evangels, including eight quick points to help the Evangels get off to a quick 11-2 lead within the first two minutes of the contest.

Throns wound up with 15 points, with Russell Harrison chipping in with 12 points and a team-high eight boards.

In a game that featured 13 ties, it was fitting that the rebounds were deadlocked at 43-43 overall, with the Evangels holding a slight 13-10 edge on the offensive glass.

The Evangels will next embark on a four-game road trip, beginning at USAO Saturday afternoon (Jan. 14). Tip-off is set for 5 pm in Chickasha, Okla.