Jensen pleased with progress with first game 13 months away 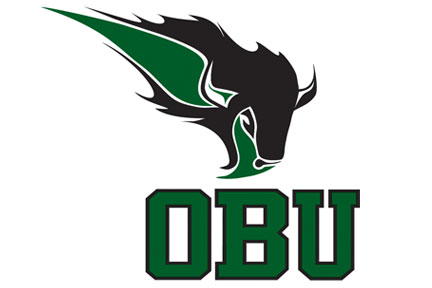 Oklahoma Baptist hired Chris Jensen as its new football coach in January and he has been working hard through the offseason to prepare Bison football to be ready.  But his offseason is a little longer than most coaches have at their disposal.

The Oklahoma Baptist football team will next take the field in the fall of 2013.

OBU is reinstating varsity football at the university, a program that has been dormant since 1940.  And Jensen is charged to oversee its revival.

And he said he knows this is not something coaches have do work with often, but that it’s not necessarily a bad thing, either.

“It’s exciting,” Jensen said.  “There’s a lot that’s unknown.  You know, there’s a certain level of comfort in having some traditions already being established.

“But we make sure the players understand that they are going to be an important part of establishing traditions that 40 years now, when they come back to watch games, they’ll see that they were a part of starting.  And this is exciting for our players to think like that.”

With the faith that the school has shown in him to give him this task, Jensen said that he is not going into it alone.

“I just ask God every morning for wisdom and discernment to make good decisions,” Jensen said.  “I also think it’s been extremely important to hire good staff members.  The assistant coaches I’ve brought in have crucial in the recruiting process and they will also add significantly in the fall when we get into the practices.”

IF YOU BUILD IT, THEY WILL COME

OBU is a member of the Sooner Athletic Conference, but in football will compete the Central States Football League.  Bacone College and Langston University are the only other Oklahoma schools in the CSFL.  Panhandle State plays a CSFL schedule each year, but is not eligible to win the league title.

It would seem there might be difficulty in recruiting athletes this far in advance to play for a team that was a year and a half away from its first competition during the recruiting season.  But Jensen said that he hasn’t experienced a negative effect.

“I was hired in the middle of January and we had Signing Day at the beginning of February and I really didn’t have much time to get recruiting done before then,” Jensen said.  “But we’ve been blessed with 70 young men who have expressed an interest to play here and we had 30 already on campus.  So our roster is right at 100.

“Personally, I think that God’s hand has been in it.

“We’ve really haven’t experienced that much difficulty in there being over a year away from playing football games.  All the guys we’ve talked to are extremely excited about getting on campus.  And I think they’ve embraced the idea of getting acclimated to university life before having the extra stress of a football schedule.”

Additionally, this class of players will have all of its eligibility even though it has been on campus for the 2012-2013 season. NAIA rules allow for four years of eligibility to be completed over a 10-semester period.

So in the interim, this leaves a lot of time for practice.  And Jensen sought help as to how to make the best use of his time.

“There’s not necessarily a form that you follow on this type of deal,” Jensen said.  “This doesn’t happen often.  I did call the coach at Wayland Baptist to find out how they approached last fall.”

Wayland Baptist in coming into its second football season, after starting the program in 2011.

“I think the conclusion we came to is that it’s not going to be like a fall as far as the practice schedule goes,” Jensen said.  “It’s going to be more like a spring – an extended spring.

“We’ll practice everyday, but we’re going to give the kids as many three-day weekends as we can.  And there’s a duel benefit there because it gives the kids a chance to get away more and it gives us as coaches the chance to watch more high school games and scout some of our opponents for 2013.

The Bison will have three intrasquad scrimmages and parents and fans will get the chance to come out and watch.

“The way we’re looking at is that we’re going to have two spring practices before we head into next football season.”

It’s almost 13 months until the final day of August 2013.  But Jensen is doing his part to get his team prepared at the proper pace.  And he said that he is enjoying what he is doing.

“There are some things that are inconvenient about getting started, but you have to look at as a temporary inconvenience that means a permanent improvement,” Jensen said.

“We’re excited about everything that is taking place here.”