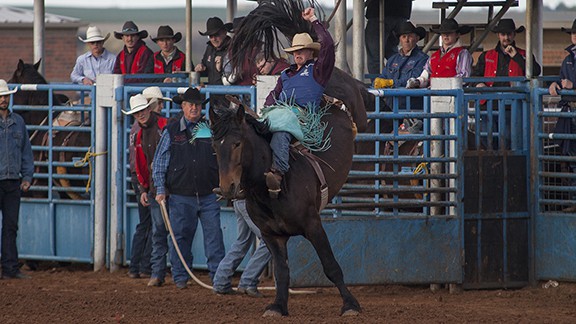 For the second straight week, the SWOSU Men’s team recorded a top finish at the rodeo as they followed up their win at Garden City with a runner-up finish at home. SWOSU totaled 420 points on the men’s side, finishing behind only Southeastern Oklahoma State, and the women’s team took fourth with 120 points.

“It’s really exciting to come to the SWOSU Rodeo, we have great fans who support rodeo and I think this year was the best year we’ve had,” Stemo said on Saturday night following the championship round. “A guy doesn’t really want to overthink things, but I really wanted to have a good showing in front of the home crowd and with it being my last year at Southwestern, so I just stayed focused and the hard work’s been paying off.”

SWOSU’s Women’s team was led by Kylee Cahoy, who placed third in the short round and average of breakaway roping. She had a time of 2.9 seconds to split third place in the long round before 4.2 seconds was good for third on Saturday night. Mikayla Harrison was 2.7 seconds in the long round, good for second place but had no time in the short go.

“I was really proud of our team and how they hustled to work the rodeo,” SWOSU Head Coach Mike Visnieski said. “Things went really well because of their hard work. We had beautiful weather and great crowds all weekend and we’re very fortunate for that. I appreciate the hard work of everybody who helped put the rodeo on and I would like to thank all of our great sponsors who make the event possible.”

SWOSU’s busy schedule continues next weekend as they compete for the third straight weekend. The Dawgs will head to Hays, Kansas for the Fort Hays State Rodeo, held April 15-17.