Surviving more than just a game 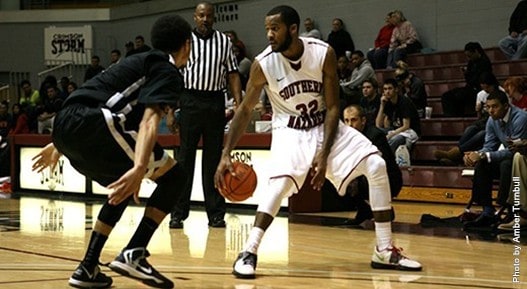 BETHANY, Okla. — Sometimes a final score doesn’t mean a thing at the end of the day and you just begin to thank God for the very breath and life that you aren’t promised tomorrow.

Forget that Southern Nazarene picked up a 61-54 win over Arkansas Tech. The reality is that after the events that unfolded Saturday afternoon inside SNU’s Sawyer Center, everyone in attendance was just happy that a young man from Arkansas Tech had his heart beating again after an absolutely scary incident early in the first half.

With 9:41 left in the first half, Arkansas Tech’s Jeff Resse came off the floor and complained of shortness of breath and within seconds came a call for paramedics after Reese collapsed on the ATU bench. Southern Nazarene’s athletic training staff, along with Arkansas Tech’s athletic trainer, immediately began working on Reese. After not feeling a pulse, both training staffs began administering CPR and used a defibrillator before Resse regained consciousness after lying lifeless for six minutes. Reese regained consciousness and began breathing again before paramedics stabilized Reese and transported him to a local hospital. The ATU coaching staff said that they had talked with Reese shortly after the completion of the game and said he was stable and that he was being kept overnight for observation.

After a 45-minute delay in all, Arkansas Tech returned to the floor to a standing ovation by all in attendance and was met with hugs from the Crimson Storm team. Both coaching staffs agreed to continue play after a short warm up.

“The game really doesn’t matter at all,” said SNU Head Coach Adam Bohac. “You realize on a night like tonight that it’s about people, relationships and loving on these kids. All over the country it’s a battle in the conference season and you’re thinking that this one game is the most important thing in the world. Then something like what happened tonight is strong reminder and makes you think about what really matters.”

SNU held a 14-7 lead when Reese collapsed and the floor was cleared. After returning to the floor, the Wonder Boys went on an 18-9 run to end the half and held a 25-23 lead at halftime. ATU pushed the lead to six on two different occasions and held a 32-26 lead with 15:28 left to play when SNU scored eight straight to take a 34-32 lead.

ATU answered with a Willie Kirkland trey, as he led Tech with game-high 21 points, and put the Wonder Boys back on top at 35-34. SNU tied it twice at 38 and at 42 before Ryan Aaron buried back-to-back 3-pointers to give the Storm a 48-44 lead and Southern Nazarene never trailed again.

Aaron finished with a team-high 19 points, going 6-for-10 from the field and 3-for-5 from 3-point range. He also added seven rebounds and two assists. Quan Conner added 13 points and four assists. The Crimson Storm shot 41.2 percent from the field and drained eight 3-pointers.

The Crimson Storm now get set for a trip to Henderson State, Thursday, for a 7:30 p.m. GAC contest.