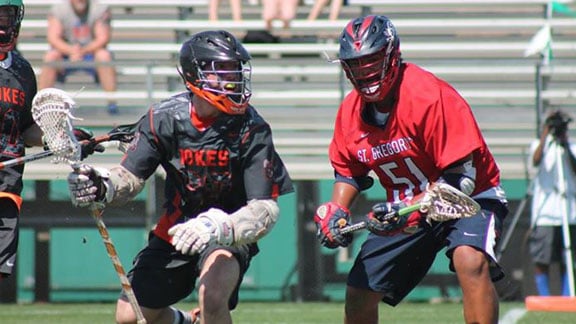 After a two year hiatus, the Oklahoma State Men’s Lacrosse team returned to the field stronger than ever. Coming in relatively unheralded as an unknown quantity, the Cowboys were picked to finish 11th in a loaded Lone Star Alliance Division II.

Defying all expectations, OSU not only went undefeated in the LSA Division II North to claim the program’s first regular season division title, but also took home a first-ever LSA Division II Championship after downing the St. Gregory’s Cavaliers, 7-6, in a tightly contested game at Greenhill Private School in Addison, Texas, the site of the LSA Tournament. 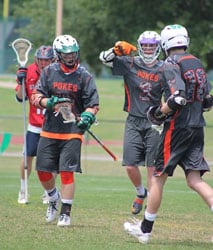 The club had struggled to maintain roster numbers and suffered through some miserable results in the years leading up to the club disbanding prior to the 2013 season. In their final season, the Cowboys played just seven of their 13 scheduled games, with their only victory coming via forfeit by a now defunct Austin College team. Beaten down and losing by an average margin of 21-6.8, a disheartened team shut itself down after the graduation of team leaders such as Sonny Shost.

“Obviously, we didn’t have the greatest past, we had some problems with the program,” explained sophomore captain Andrew Miller. “We lost some guys that got scared away because of the history, but the guys that stayed were more committed than ever.”

“When I came in, I gave them the history of the program, what we went through back in Division I when I played and then transferring to Division II and losing a lot of guys and the lack of commitment,” said OSU head coach and former player Matt Reilly. “I wanted to win, but I wanted to build a program, and I think the guys saw that and got behind that vision.”

The Cowboys grabbed a hold of Coach Reilly’s vision and then went to work making those dark days a distant memory. In a 10-game regular season schedule, the Pokes lost only to LSA Division I South-side Texas Tech and Great Rivers Lacrosse Conference Division I teams Arkansas and Kansas. However, they did collect the scalp of one Division I foe this year in the GRLC’s Kansas State, downing the Wildcats 13-11 to put an exclamation mark on an outstanding first regular season back in the Men’s Collegiate Lacrosse Association.

“Those teams have a lot of guys and funding, players we wouldn’t have gotten,” said Reilly. “Watching them try to beat up on us, and we’re losing by only three goals to a Division I team, it made us think about how good we could be. When you go and play teams that are real deep on the sidelines and we’re still competing with them, it made us hungry for a championship.”

It is not just in the win-loss column that OSU has distanced itself from the plagued teams of old. The team scored 138 goals in the regular season, with an additional 27 in two postseason games, for a grand sum of 165.

Seven Cowboys have scored at least 10 goals this season, led by captains Andrew Braden and Drew Hogan with 40 and 31 goals in their freshman and sophomore campaigns respectively. In fact, Braden is one of eight freshmen to rank in the top 25 in goals scored in all of MCLA Division II. He also ranks in the top 50 players in overall points at 51, supplying 11 assists to go along with his goals. Jake Lujan led the team with 25 helpers and is in the top 30 in the nation. 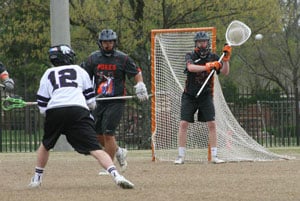 “Andrew Braden and Drew Hogan are two of our captains and they’ve been great leaders,” said Miller. “Our offense has been great this year. They’ve not only been scoring a lot, but they’ve made it hard for other teams to game plan for us. We’ve got plenty of other guys, like Haden Barber, who can put up a lot of goals, too.”

It’s not just offensively that the Pokes have excelled though. OSU is one of seven teams in LSA Division II to give up 90 goals or fewer this season. Miller, the Pokes’ goalie, boasts the 11th-best save percentage in the country at .668, and it’s not an inflated one. A rock in the crease, Miller has recorded more saves than just about anyone in Division II (241) while facing 361 shots on frame.

“The hardest thing mentally was managing the team on top of my own game,” explained Miller, who also serves as the team’s president. “We’d have problems before games where guys didn’t want to show up until 30 minutes before. I just really wanted to win, and I wanted to put my best effort forward.”

With such a successful regular season, a LSA Championship became a reality as OSU went into the postseason tournament as the No. 1 seed in the Division II North. A 20-10 drubbing on No. 2 South seed Rice set up an all-Oklahoma final against No. 3 North seed St. Gregory’s.

A tightly contested match between two of the top three teams in the North provided no separation for most of the contest. If not for late-game heroics by Hogan, who collected a ground ball and immediately fired it at SGU’s goal with 30 seconds on the clock, the game would have been destined for overtime to break the deadlock. A last-ditch missed shot by the Cavaliers gave the Cowboys their first-ever postseason title.

“It was difficult because their [St. Gregory’s] goalie played really well,” Miller explained. “Our offense wasn’t converting like they had been all year, so the defense had to step up a little more than they had the rest of the season. We did a really good job against St. Gregory’s attack. We kept on peppering the goalie and we got the goal in the end.”

With the conference title in the bag, the Cowboys set their sights on Irvine, Calif., and Chapman Stadium for the 2015 MCLA National Championship spanning the week of May 11-16. Unfortunately, funding the trip has led to issues for the team, just as it does for numerous other club teams around the country who lack financial support from their respective universities.

“We’re in a tight situation right now for funds,” lamented Miller. “It costs a lot to go to nationals. We have a couple of fundraisers going on, but it looks like we might have to sit out this year.”

••• If you would like to donate funds for the OSU lacrosse team to assist with the cost of the trip to nationals, please visit this site:  http://www.gofundme.com/s9h2etb3 •••