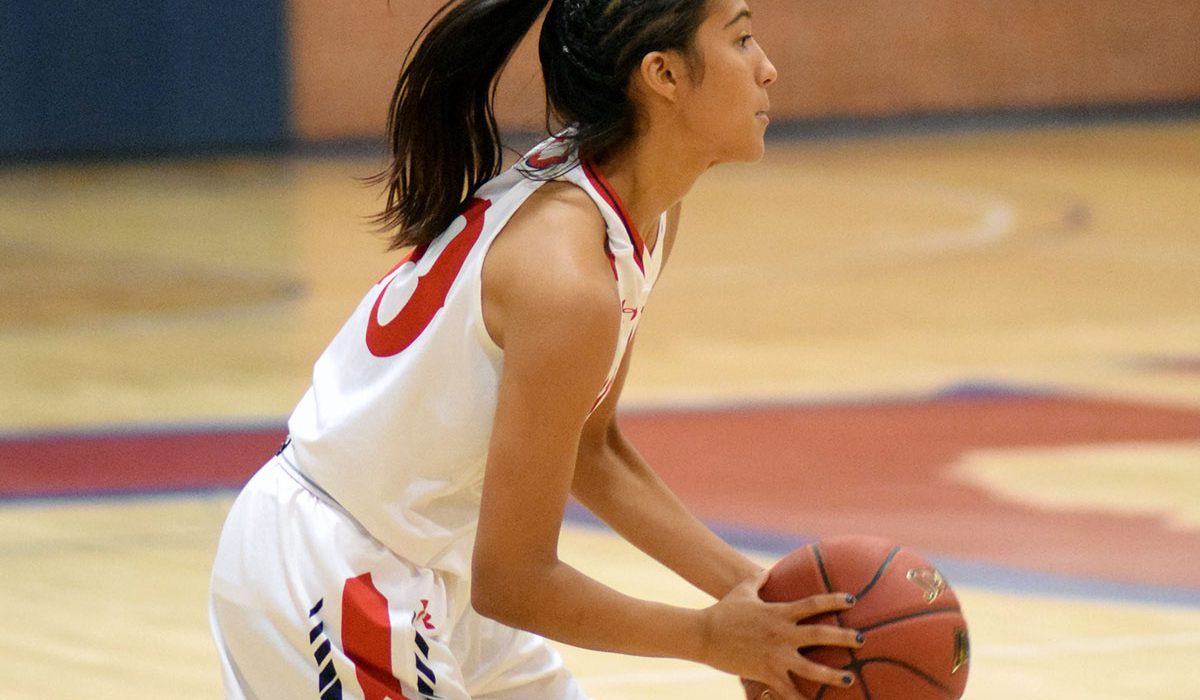 GOODWELL —Solid efforts in the first half of Monday night’s matchup against Northern New Mexico College helped pull the Aggie women’s basketball team through a sluggish second half performance, to claim their fifth straight victory of the season, 60-53 over the Eagles.

With only four turnovers over the first two periods of play, Panhandle State controlled the court and capitalized on 13 lost balls by their opponents. The Aggies scored 17 first-half points off turnovers and averaged a 45.7 field goal percentage led by Addison Munsch and Naomi Rodriguez, who put up 13 and 12 points respectively before the break. Rodriguez went 3-3 beyond the arc in the first half, and Munsch scored on 2-3 three-point attempts. The team headed to the locker room with a 20-point advantage at halftime, as the scoreboard showed the Aggies on top 43-23.

The Eagles outscored the Aggies 14-5 in the third period, as Panhandle State started on a cold streak and went 1-6 from the field over the first three minutes of the second half. Rodriguez would score the first points of the fourth period with a jump shot at the 8:08 mark. Rodriguez and Dearmin then sunk back-to-back layups leaving the Aggies in the lead 54-41 with five minutes left on the clock. The Eagles held the Aggies scoreless over the next three minutes and narrowed the gap to a four-point deficit after connecting on four of their next five shots. With 1:31 left in the game, the Aggies owned a 54-50 lead. As the Eagles started drawing fouls to gain the edge, the Aggies were sure shots from the line, landing six of seven free throw attempts as time ticked away. The Eagles were allowed just three points in the final minute of the game, and fell by seven points 60-53.

For the game, the Eagles showed an upper hand in shooting percentages leading the Aggies across the board with a field goal percentage of 39.6 percent, three-point percentage of 33.3 and free throw average of 81.8 percent. The Aggies averaged 31.8 from the field, 20.7 percent beyond the arc and 70.6 percent at the line. Panhandle State proved solid at the boards with 34 total rebounds for the game and 13 second-chance points; NNMC totaled 35 rebounds and seven points off the boards. Junior Hannah Faulks held a game-high for the Aggies with eight rebounds; NNMC’s Jade Hill also brought down eight boards in the game.

The Aggies also showed superior from the bench, leading 26-3 in total bench points for the game. Rodriguez led the efforts scoring 18 points as a non-starter; Munsch shared the team-high scoring numbers, also adding 18 points for the Aggies. Rodriguez was also credited with three steals, just one behind teammate Monti Regier who had four takeaways on the night. Northern New Mexico’s Kyanna Kowatch earned the game-high in scoring with 19 points and RanDee Toya was credited with a game-high of four blocks on the Aggies.

Head Coach Victor Esparza commented after the game, “We got off to a great start in the first half, and really defended them and made things tough on them. We came out a little flat in the second half, but we figured out a way to pull out the win.” He added remarks on the team effort stating, “I’m proud of this group for wanting to defend like they are, Northern New Mexico is a high-scoring team and we held them to 53 points which speaks volumes of our kids’ effort on that end of the floor. We didn’t have our best shooting night by far, but we found ways to win and at the end of the day that’s what matters most. Our fans play a big roll on our effort and we encourage them to keep coming back and supporting our team.”

Now sitting 5-0 for their best season start in over two decades, the Lady Aggies will prepare for two exhibition games on the horizon before they open Sooner Athletic Conference play at home on Nov. 30 against Southwestern Assemblies of God. The team travels to Tulsa this weekend for a showcase game at Oral Roberts on Nov. 17 at 7 p.m. They return to Anchor D Arena for an exhibition matchup against Northwestern Oklahoma State on Nov. 21 at 6 p.m. Both games will offer live stats and video links online.