Aggie women bounce back at home, men fall to UAFS 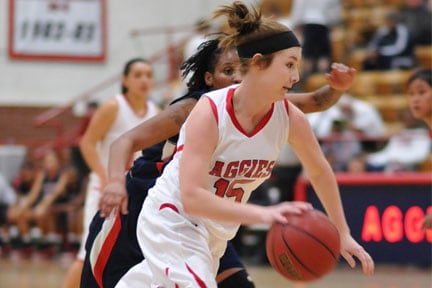 The Aggies finally broke their six game losing streak in a close battle with
the Lady Lions, keeping fans on the edges of their seats until the final
buzzer. UAFS enjoyed a slim lead throughout much of the first half, but with
3:53 left on the clock, OPSU’s Meagan Bell nailed a three-point shot to put
the Aggies up by one. Four good shots at the free throw line gave them a
five point advantage, but the Lions battled back, cutting the Aggie lead to
just one as the half ended 33-32.

In half two, it was OPSU’s turn to maintain a narrow margin, at least until
about the nine minute mark when the UAFS women evened the score at 49 all
and went on to lead by seven with just under four minutes left in the game.
Two points from Da’Veonna Munson and two treys by Megan Taylor put the
Aggies up by one, but the Lions took the lead by two with a layup and a free
throw by Katie Ben Amor with just over a minute left. Sarah Johnson hit a
shot from beyond the arc to put OPSU back in the lead followed by two free
throws from Whitley Coca for a three point advantage. With four seconds on
the clock, UAFS put the Aggie lead back to two points, but Coca again put in
two shots from the charity stripe to clinch the 66-62 win.

Coca led all scorers with 18 and also brought down seven rebounds. Johnson
earned 14 points and Sharice Papaleo put in nine and got eight rebounds. For
UAFS, Angi Ramey earned a double double with 13 points and 12 rebounds and
Ben Amor scored 14.

The women take a Texas road trip next week, taking on McMurry University in
Abilene on Thurs., Jan. 24 and then traveling to Austin to face St. Edward’s
on Saturday, Jan. 26.

Goodwell, Okla. – Even though the University of Arkansas-Ft. Smith men’s
basketball team left Goodwell with their perfect Heartland Conference record
intact, the Aggies didn’t make it easy for them.

The lead see-sawed back and forth in the first half with neither team
gaining more than five points over the other. Midway through the half,
Tavien Rosemond boosted the excitement with an athletic put-back dunk to
give OPSU a five point edge. UAFS fought back and the lead changed hands
nine more times until 38 seconds remained when Damar Hill went to the free
throw line to give the Aggies a 32-31 lead going into the break.

Half two started much the same with four lead changes through the first six
minutes of play, but after the fifth change, the Lions remained in charge
and took the lone first place spot in the Heartland Conference with an 80-73
win over the Aggies. OPSU’s two-point field goal percentage, 50.9, was
better than their opponent’s (42.4 percent), but the Aggies could not rely
on their 3-point shots, going only 2-14 for the game.

Three UAFS players, Corey Copeland, Dijon Farr, and Jake Toupal led the
scoring with 16 points each. Copeland also had 10 rebounds. Rosemond had 15
points followed by Hill with 14 and Bill Lee led the Aggies with seven
rebounds. Lee, Carlos Tapia-Ponce, and Kysahn Sands each added 10 points.
The Lions are now 10-6 and 6-0 HC while the Aggies are 4-13 and 0-6 HC.

The men take a three game Texas tour, starting with a game against McMurry
in Abilene on Jan. 24, then going to Austin to face St. Edward’s in Austin,
and ending with a non-conference game in Edinburg against the University of
Texas-Pan American.