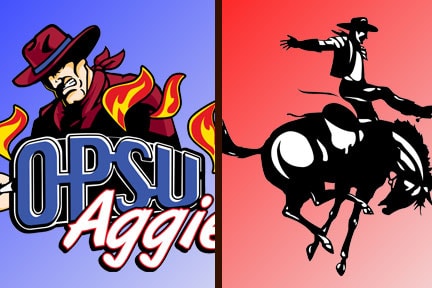 A Sarah Koster kill got the Aggies started in set one, and the team went on
the attack, earning five quick points with Koster serving. OPSU remained
ahead the entire set, leading by as much as eight points and took the 25-21
win. They continued their pressure in set two, but the Rangers came from
behind to tie it up and the lead continued to change hands until the final
points of the game when several OPSU attack errors allowed NWOSU to pull
ahead and get the 25-20 win.

In set three, the Aggies had an answer for every Ranger point and had it
tied at seven all, but OPSU never led in that set or in set four and lost
the match, 3-1. Competing in the Great American Conference in NAIA, this is
the first volleyball team at Northwestern in 30 years.

Kayla Schwartz handed out 14 assists and Terra Madden had 13 while Alex
Schmitt had 12 digs. Ranger Paola Turibio led both teams with 20 kills and
her teammate Lacy Stewart had 18 while Erica Skipper and Shaina Eddings
earned 11 and 9 for the Aggies, respectively.

The women play two matches at home this week. Thursday, Oct. 11 they face
conference rival the University of Texas of the Permian Basin at 7 p.m. and
on Saturday, Oct. 13 at noon, they play McMurry University.