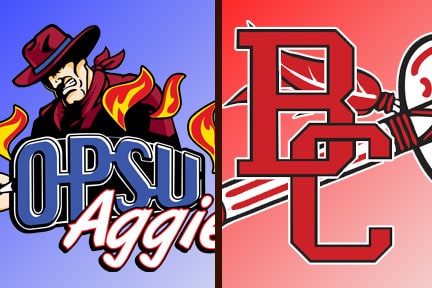 Muskogee, Okla.-The OPSU Aggies traveled to Muskogee, Okla., on Saturday to
battle the Warriors of Bacone College and were looking to keep up their
winning ways.

Bacone entered the game with a 4-2 record and were coming off a big 34-0
victory against Southwestern Assemblies of God. OPSU was coming off their
own 30-9 win over Texas College and were hoping to improve their record to
4-2.

The first quarter was a defensive battle as both teams had an interception a
piece, but OPSU was able to put the first points on the scoreboard with a
10-yard touchdown run by quarterback Caleb Holbrook. At the end of the first
quarter, the Aggies led 7-0.

Unfortunately, the Warriors offense broke out in a big way throughout the
second quarter. It started with a 5-yard TD pass from QB Kyle Kuban to wide
receiver Kenneth Price, but the point after attempt was missed so the
Warriors were down 6-7. Bacone capitalized on a Holbrook fumble with a
17-yard TD pass from Kuban to Rashad Rich. The 2-point conversion attempt
was no good so Bacone’s lead was just 12-7. On OPSU’s ensuing drive,
Jercorey Quarterman picked off Holbrook’s pass and on the following
offensive play, running back Tyler Thomas took the handoff and ran for 57
yards into the end zone. The extra point was good and the Warriors now led
19-7. On the Warriors next drive, Ryan Morrow put it in from a yard out to
push Bacone’s lead to 26-7 and that was the score at the end of the first
half.

On OPSU’s second drive of the second half, Quarterman again picked off
Holbrook’s pass and again set his team up for a touchdown drive as Kuban
found Rich for a 37-yard pass to put Bacone up 33-7 going into the fourth
quarter.

Backup quarterback Justin Billiot took over for the Aggies, but in his first
drive, Chase Rettig intercepted his pass attempt. On OPSU’s next drive, they
were held to a punt and Rettig returned the punt 45 yards for a TD. That
touchdown was the final score of the game, giving the Warriors the 40-7 win.

The Aggies were held to just 254 yards of total offense and the killers for
their offense were the 4 interceptions and one lost fumble, with four of
those five turnovers helping the Warriors set up touchdowns.

OPSU travels to Alva, Okla. next Saturday to take on Northwestern Oklahoma
State University with kickoff at 2:00 p.m.