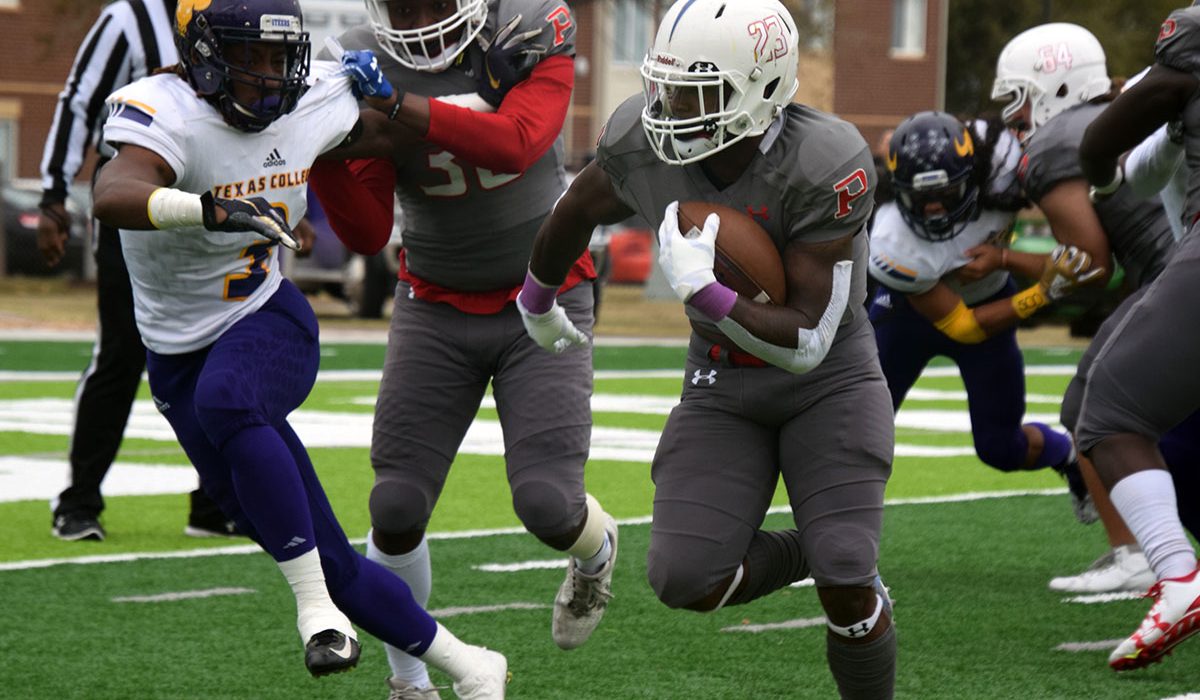 Running back Carlos Ransburgh ran in three touchdowns for the Aggies and hauled in an 82-yard reception for a fourth. - Photo by Rylee Higgins, courtesy OPSU Sports Info.

GOODWELL — Ten seniors took the field at Anchor D Stadium on Saturday, as the Panhandle State football team hosted their final home game of the season against SAC opponent Texas College. The Aggies took charge, scoring 35 points in the first half and ending with a 42-point shutout victory over the Steers.

A rousing first quarter performance saw Panhandle put 21 points on the board in under eight minutes time. Junior running back Carlos Ransburgh collected the first three touchdowns of the day, scoring on run plays of seven yards, 40 yards and two yards respectively. The Darkside Defense served the Steers three quarterback sacks in the first quarter and held their opponents to 11 yards rushing and 49 passing. Seniors Jawan Purifoy, Sequoia Smith and Justin Slaughter along with Braden Price and Diamante Pounds put collective pressure on Texas College’s starting QB Vontyne Williams, who took a total of 23 yards lost on the first quarter sacks. Senior Deyleon Williams came down with an intercepted pass from Williams on the Steers’ second drive of the day.

Ransburgh and Aggie quarterback Martez Vrana opened the second quarter in equally exciting fashion, with an 82-yard touchdown connection that gave the Aggies a 28-0 lead with 14 minutes remaining in the half. The Aggie defense did a stellar job of containing the Steers in the second quarter, allowing just 11 total yards of offense. Sequoia Smith and Matt Hernandez each collected solo sacks, with Smith forcing a fumble for a loss of 14 yards. Vrana also suffered two sacks in the second quarter, but bounced back with a scoring drive in the final two minutes of the half. A three-yard quarterback keeper added an Aggie touchdown with nine seconds left on the clock. Texas College fumbled on the ensuing kickoff, and Diamante Pounds recovered the ball at the TC-40 yard line. Panhandle State left for the locker room leading 35-0 at halftime. At the break the Aggie offense had accounted for 71 yards rushing and 172 in passing; Vrana was on-target for 12 of 13 attempts.

The Aggie defense remained acutely frugal throughout the third quarter, giving up a mere ten yards rushing and zero passing to the Steers’ offense. Offensively the Aggies suffered a second-half setback after losing Ransburgh to an injury in the second quarter. The team acquired just 13 yards on the ground in the third quarter, and Vrana was hit with two more sacks before being replaced by senior QB Brandon Ramon. Ramon finished out the game and posted the final touchdown of the day on a two-yard target to George Dominguez. Pounds pulled down another quarterback sack, forcing a fumble in the fourth quarter which was recovered by d-lineman Triston Inman. Both teams kept to the run game as time ticked down, and the Aggies notched their sixth Sooner Athletic Conference victory by a score of 42-0.

For the game, the Aggie offense accrued 391 total yards, finishing with 110 rushing and 281 passing. Vrana completed 15 of 16 pass attempts and totaled 198 yards and four touchdowns through the air. The freshman was listed second in rushing with 26 yards on 11 carries, behind Ransburgh who tallied 48 yards on five carries. Emile Cola led the Aggies in receiving, hauling in three catches for 66 yards followed by Miquel Hudson who totaled 41 yards on four receptions.

Defensively, Panhandle State did not allow their opponents to enter the red zone once throughout the entire game. Diamante Pounds posted his best game of the season taking down 6.5 tackles, four tackles for loss and 2.5 sacks in addition to forcing one fumble and recovering two. Jawan Purifoy also totaled 6.5 sacks including six solos and one TFL.

Head Coach Russell Gaskamp commented on the performance of the Aggie defense.

“Once again our defense played fantastic. We were able to stop the running game and that turned Texas College into a one-dimensional team. Once they got that way we were able to create great pressure on them throughout the game. Diamante pounds played outstanding.”

Gaskamp also offered offensive perspective stating, “At the beginning of the year we did not do a very good job of protecting the ball, but over these last four weeks we have been able to win the turnover battle in every game. It says a lot about the way that our offense has taken care of the ball and at the same time our defense has been able to create turnovers. Anytime you’re able to do that you have a great chance to win the game and that will be incredibly important next week.”

The win gives Gaskamp and the Aggies a 6-4 record on the season, and a second-place standing within the conference. With one game remaining on the schedule, the Aggies will face-off with a familiar foe this week as they battle for the bell at Langston.

“Our number one goal going into the season was to give ourselves a chance to win the league,” Gaskamp said. We knew that the path would go through Langston; they had a good team last year and an even a better one this year. It is going to be one heck of a challenge for us to go on the road and play against them. I do believe though, that our guys understand what it’s going to take to win this game and, specifically, how we have to win games at this time of the year. We are excited about the opportunity.”

Panhandle State meets with the Lions on Saturday, Nov. 10 at 2 p.m. in Langston. The team hopes to see a pack of Aggie fans in the stands to cheer them on, but for those at home, live stats and video links will be available online at opsuaggies.com.