Aggies take down No. 1 Texas Wesleyan for first SAC victory 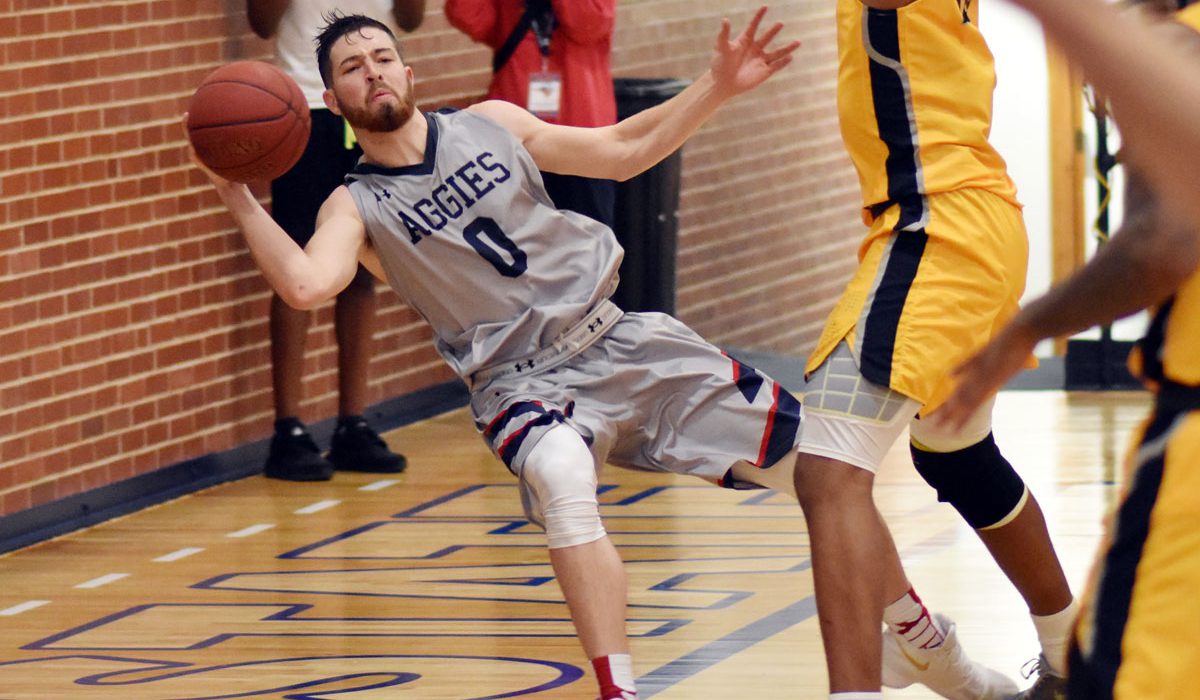 Forward Jace Kerr helped lead the Aggies to their first conference win of the season against No. 1 Texas Wesleyan. - Sarah Brady photo

GOODWELL—Aggie fans were treated to an exciting day of basketball at Anchor D Arena on Saturday afternoon as they Panhandle State men’s team proved superior, with a win over the No. 1 team in the nation, Texas Wesleyan University.

Trailing by as much as 17 points in the first half, the Aggie men battled the entire 40 minutes and came out on top with a 90-81 victory over the top-ranked Rams. The Aggies were down 41-33 going into the break but dominated the second half, outscoring their opponents 57-40 in the final twenty minutes. The team was coming off a disappointing performance in their conference opener against Southwestern Assemblies of God on Thursday; the Lions overtook the Aggies by a score of 95-68, their largest point differential of the season.

The Aggies’ starting lineup accounted for all but ten points in Saturday’s matchup, led by Jace Kerr who managed to connect for a game-high of 25 points while playing with bronchitis. Kerr also led the team in Thursday’s efforts against SAGU with 15 points. Freshman DK Sumo and senior Tyler Pate were the team’s next leading scorers with 19 and 18 points respectively. Sumo earned the first double-double of his college career by adding ten rebounds against the Rams. Teammate Jaedon Whitfield maintained his record by earning his seventh consecutive double-double of the season on 15 points and 16 rebounds; Whitifield took down ten boards and 11 points in Thursday night’s performance against the Lions. Pate shared the game-high in assists with Brandon Jenkins of TWU, each contributing five deliveries in the game.

Improving from 27.6 percent shooting in the first half to over 53 percent in the second half, the Aggies did a better job of setting up shots after the break; shooters connected on seven of 17 three-point attempts in the second half after going 2-16 beyond the arc in the first. The team went 33-39 at the line, led by Kerr who hit on 11-14 free throw shots.

Head Coach Jerry Olson saw tenacity in his team stating, “I’m really proud of our guys. We could have quit when we were down, but we kept battling.” Olson gave credit to his assistant coach Jake Regier saying, “I thought he did a great job with the scouting report to prepare us for this game.” Seeing a need for improvement on offense Olson added, “We just need to get reversals offensively. When we reverse over and over, we can get whatever shots we want.” He also felt the team adjusted well in second half with the “Jordan Rules.”

Panhandle Sate men’s basketball stands 6-2 on the season and 1-1 in Sooner Athletic Conference play. They will compete in two exhibition matchups this week starting in Weatherford, Okla. with a game against Southwestern Oklahoma State at 7 p.m. on Friday, Dec. 8; the team continues on to Greeley, Colo. for an exhibition match against UNC on Sunday, Dec. 10 at 5 p.m. The Aggies re-enter conference play on Dec. 14 in Bethany with a game at Southwestern Christian.