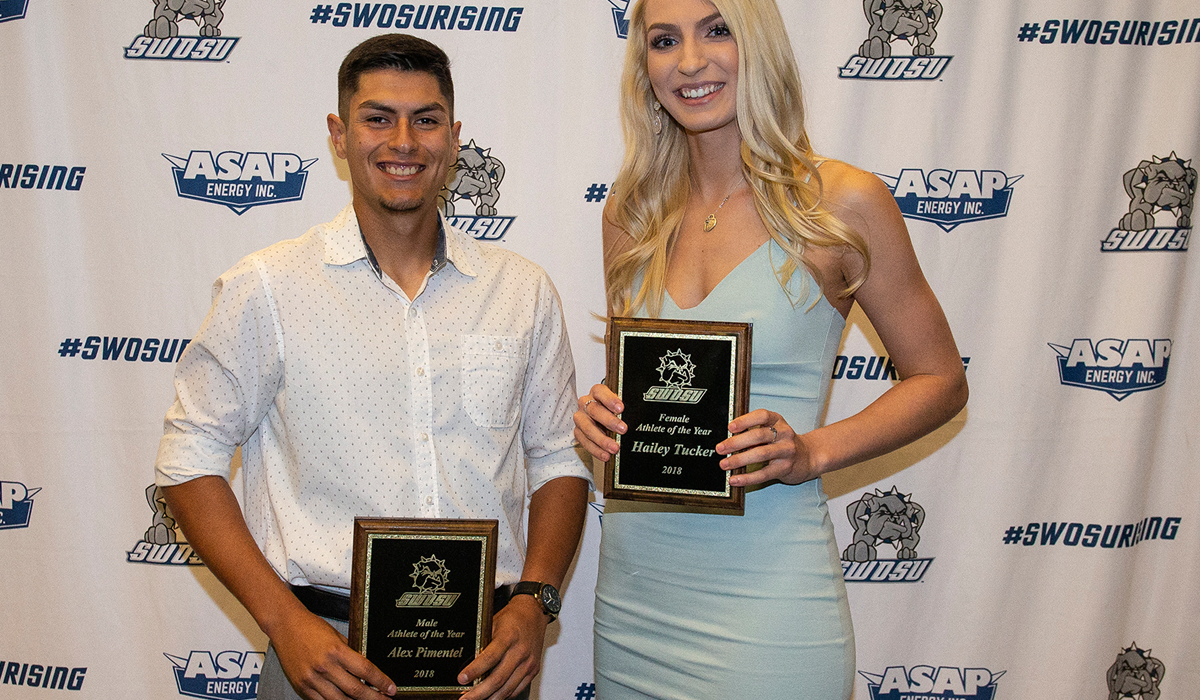 WEATHERFORD, Okla. – The top honors at the SWOSU All-Sports Banquet went to a pair of juniors as Alex Pimentel of the Bulldog Baseball team and Lady Bulldog Basketball All-American Hailey Tucker were named SWOSU’s Male and Female Athletes of the Year on Wednesday evening at the Pioneer Cellular Event Center.

Other honors handed out on Wednesday night were the Scholar-Athlete of the Year Awards, which went to Brandon Roe (football) and Erica Brunet (soccer). SWOSU Athletic Director Todd Thurman also presented the Cecil Perkins Service Award to Dr. Les Crall, a longtime faculty member at SWOSU who has assisted with game operations of multiple sports for better than 30 years.

Alex Pimentel (El Paso, Texas) has burst onto the scene in his first year with the SWOSU Baseball team. The Bulldogs’ shortstop currently leads the Great American Conference with a .410 batting average and 68 total hits while also leading the Dawgs with 13 doubles and 48 runs batted in. Pimentel is also second on the team with six home runs and three triples and he has stolen five bases. With at least three games remaining in the season, his single-season totals for hits and batting average already rank on the Top 10 list for SWOSU’s NCAA Division II era. He has helped the Bulldogs to a record of 22-20 and his team is on the verge of clinching a berth in the GAC Tournament for the sixth time in seven seasons. Pimentel is now the fifth baseball player to be named SWOSU’s Male Athlete of the Year in the NCAA Division II era and the first since Shane Martin during the 2012-13 school year.

Tucker (Bartlesville, Okla.) had a record-setting junior season as she helped the Lady Bulldogs to their first regular season Great American Conference Championship and a third berth to the NCAA Division II National Tournament in the past six seasons – the first since 2014. She led the Central Region in scoring (20.5 points per game) while ranking third in the Great American Conference in blocked shots (56) and ninth in rebounding (7.5 per game). Tucker garnered several in-season and postseason accolades, being named to three All-America Teams along with a Second Team Academic All-America honor. She was named the GAC Player of the Year for the second consecutive season and became the first Lady Bulldog to be named the Central Region Player of the Year as well. Tucker becomes the sixth SWOSU Women’s Basketball player to be named the university’s Female Athlete of the Year and the first since Michelle Fisher took home the honor following the 2013-14 season.

Brandon Roe (Choctaw, Okla.) is the third consecutive SWOSU Football player to claim the Male Scholar-Athlete of the Year award and the fifth in seven seasons since the honor has been given. He’s a three-year starter for the Bulldogs’ offensive line and he appeared in nine games during the 2017 season, making eight starts at left guard and one start at right tackle. Roe is now a two-time CoSIDA Academic All-District selection and he added the distinction of Academic All-American this past year as he maintains a perfect 4.0 grade point average as an Engineering Technology major.

Erica Brunet (Brampton, Ontario) becomes the first SWOSU Soccer player to be named Female Athlete of the Year after a standout junior season. She helped her team to the Great American Conference Tournament Championship, which led to a bid in the NCAA Division II Central Region Championships, where SWOSU defeated Missouri Western and Minnesota State before falling to eventual National Champion Central Missouri in the regional final. Brunet was named First Team All-GAC and selected to the CoSIDA Academic All-District team for the second straight season after maintaining a 3.95 grade point average while majoring in Special Education.

The Cecil Perkins Service Award was presented to Dr. Les Crall on Wednesday evening. A Weatherford native and graduate of Thomas High School, Crall graduated from SWOSU in 1979 with an Accounting degree before going to Law School at the University of Oklahoma. Upon his graduate from OU, Crall returned to SWOSU and taught in the School of Business for 28 years. While working at SWOSU, he began assisting with the Sports Information department before working with the radio station for football broadcasts and serving as the public address announcer during basketball – both positions he has held for a number of years. In the early 2000’s, Crall’s family donated land to the university that has now become the SWOSU Athletic Complex at Crall Corner and he adds the Cecil Perkins Service Award to a long list of recognition he has earned during his career at SWOSU.

Each coach spoke briefly about their season and presented their respective Most Valuable Player awards. A list of those can be found below: