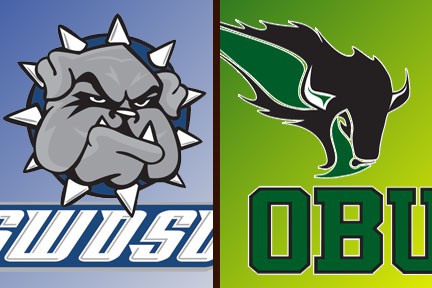 SHAWNEE – The SWOSU Football team scored in all three phases on Saturday as they earned their first road victory of the season, defeating Oklahoma Baptist 42-14 at Crain Family Stadium. The victory improves the Bulldogs to 5-3 with three games remaining in the season.

Special teams got the action started as Trevon Hartfield returned the opening kickoff 87 yards to set the Bulldogs up with great field position. On fourth and goal from the two, starting quarterback Brooks Robertson plunged in for his first career touchdown, giving the Bulldogs and early 7-0 lead.

The lead grew to 21-0 early in the second quarter as Kenneth Martey went in untouched from four yards and a punt blocked by Daylan Dial was recovered by Dominic Blue in the end zone for a special teams score. Oklahoma Baptist scored on their final drive of the half, leaving the Bulldogs with a 21-7 lead at the break.

After a scoreless third quarter, SWOSU’s Conner Bays snared his third interception of the year and raced 41 yards down the visitor’s sideline before finding the end zone and making the score 28-7. OBU answered on their next drive before Martey added a one-yard touchdown run and D.J. Jones scored on a punt return for the second straight week – this time from 69 yards – making the final score 42-14.

Oklahoma Baptist actually outgained the Bulldogs with 309 yards of total offense, compared to 295 for the Bulldogs, but the complete-game effort from SWOSU was the key to victory. Karltrell Henderson rushed for 97 yards on 16 carries and Kenneth Martey had 70 yards and two scores on 17 carries to lead the Bulldog offensive attack. Brooks Robertson was 13-for-18 passing for 108 yards, finding Jones six times for a team-best 39 yards.

Bays led the SWOSU defense with eight tackles, one-half tackle for loss, a pass breakup and the pick six while Jake Doyle and Austin Loomis had seven and six tackles, respectively. Clinton Horn had two sacks for the Bulldogs while collier Ward and Julian Cole each had one also.

The victory is the third straight for the Bulldogs and they will take a 5-3 record into Senior Day against Harding next Saturday at 2:00 pm at ASAP Energy Field. A victory over the Bisons would give SWOSU their first four-game winning streak since 1996.