Alva holds off Newkirk in OT 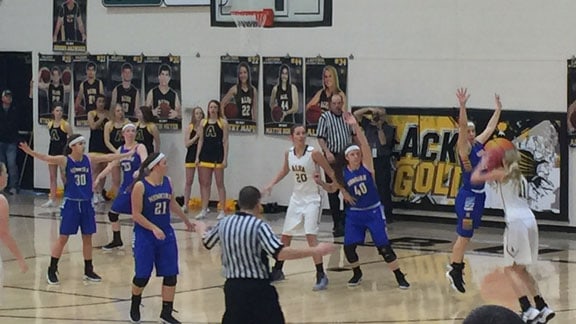 The Alva Ladybugs beat the Newkirk Lady Tigers in overtime on Tuesday night, 39-33.

The game started off at a somewhat slow pace and with sloppy play on both sides. Neither team could get a bucket leaving the game scoreless for the first five minutes until Alva senior, Whitney Randall broke the scoring drought with an impressive and-one basket.

The second quarter was very much like the first, low-scoring but a close game nonetheless. The score going into halftime was 13-9, the Alva Ladybugs with the advantage.

Action really started picking up in the second half from both teams. Each team started scoring more, but the Ladybugs managed to stay just out of reach for most of the game. Action increased severely in the last minute of play.

The Alva Ladybugs had the lead down the stretch until the Lady Tigers hit a clutch three pointer to tie the game up at 31 all with 18 seconds left in regulation. The Ladybugs called a timeout and did not get a shot off in the closing seconds, due to a steal from Newkirk junior Halie Hawkins to end regulation.

Overtime started out very exciting with a quick three coming from Alva freshman Payton Jones to put her team up, 34-31. Both teams went back and forth scoring, however the Ladybugs always kept the lead. Down the stretch, the Lady Tigers missed two big free throws with just 1:20 remaining in the game.

The Alva High Ladybugs then played keep away and after a sequence of fouls and free throws, nudged their way to a 39-33 victory.

Some breakout stars of the night were senior Whitney Randall, who racked up 21 points and senior Lexie Shafer whom was a defensive presence with three blocks.

Next, the Alva High Ladybugs (9-3) are getting geared up for the NOC/Tonkawa tournament to take place next week.