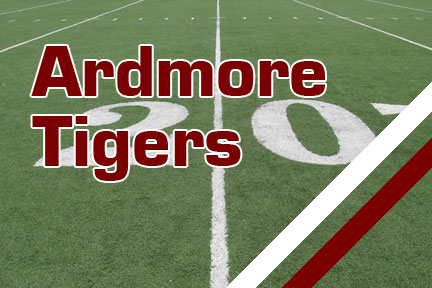 After speaking with coach Doug Wendel of the Ardmore Tigers, one couldn’t help but feel the confidence he has with his football team.

But does Wendel see the bigger prize for the Tigers? Even bigger yep.

Wendel couldn’t help but brag about his offense, which is quite good and also unconventional given the jump most schools have gone for the spread offense.  Ardmore runs a flexbone offense, a derivative of the wishbone.

Why, do you ask?  Well, when Wendel took over four years ago, he noticed athletes that played three sports and did not naturally play the traditional quarterback system.  So he improvised and put his players in the best position to win right away.  That would mean three good athletes at any time that can take it to the house behind center.

As a result, he has an outstanding offense averaging 37 points per game, led by quarterback Clay Atwood and running backs Orrin Walker and Kevion McGee.

On the flip side, he has a defense that is allowing only 14 points per game also led by the likes of Walker and McGee. While the coach wants more discipline on both sides of the ball, he is pleased with the progression the Tigers have shown this year.

Wendel isn’t just looking at this week’s matchup.  He is also aware of next week with a tough road test at Altus.  Lawton MacArthur barely won against Altus and Wendel is very conscious of that.

His goal is to at least go 1-1 the next two weeks before the last two games against Northwest Classen and Duncan.  It is huge for his Tigers to at least have home games for the early playoff rounds given the difficulty of opponents in 5A.

This season, Wendel sees a couple of solid threats outside of district, namely Guthrie and McAlester, but not to count out Skiatook. While he views his team as a state title contender, he also knows the best is yet to come.

The coach has been eyeing what is coming with future players and is excited that he is on the cusp of bringing Ardmore football back to its rightful place among the elite teams for years to come.