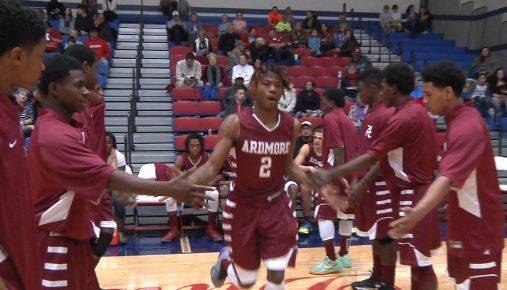 With a 10-day break, there was a little rust to shake off for both Ardmore teams who traveled to Durant for a doubleheader on Tuesday night.

It took both teams about a half to get things going, but the girls and the boys both did just that and came away with wins over the Lions.

Ardmore showed pressure defense early on, but went away from it late in the first quarter allowing Durant to get some momentum and the Lady Lions (1-5) led 12-9 after one.

Durant extended the lead to 20-12 midway through the second quarter.  But a lane violation and an errant pass allowed turnovers that Ardmore turned into points and retook the pace of the game, trailing by only three at intermission.

Zoe’ Booker came alive in the third quarter to break open the game.  She scored 12 of her game-high 14 points as the Lady Tigers blew up for an 18-1 run in the period and put it on cruise control after that.

Ciera Taylor had 14 points for Durant.

He opened the game with 12 points, including two successful three-point plays, making the close range shot while being fouled and connecting on the subsequent free throw.

The Lions went up 15-12 five minutes into the opening quarter, but the Tigers went on a 10-0 run following that and never trailed again.

Durant (2-4) kept things close through three quarters on the strength of the offense of Taylor Cox, who put in a team-high 21 points.

But the aggressive play of the Tigers on defense finally wore down the Lions, as was evident by the 21-5 fourth quarter, when Ardmore pulled away.

Johnson scored nine more of his 30 points in the fourth quarter and had two dunks.