Atoka boys up to No. 1 in Class 3A basketball 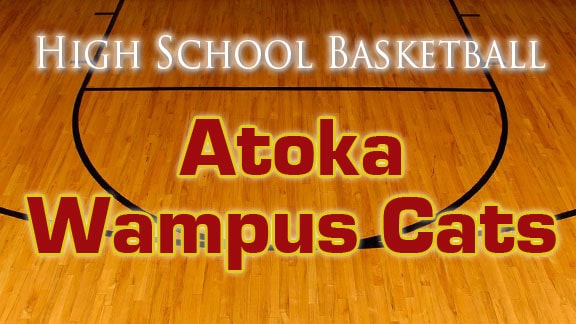 Two days after taking home the championship of the Kingston New Year’s Classic, the Atoka Wampus Cats have moved into the top spot in the OSSAA Class 3A boys basketball rankings released on Monday.

AHS coach Russ Harrison said the results are something nice for all concerned on different levels.

“The recognition is good for our kids and our community and our school,” Harrison said.  “That’s really all we’re worried about.

“The rankings themselves, you know, that’s something the coaches put out there, so at the same time we’re getting respect from the coaches around the state, and that feels good.”

And the rankings will soon help in determining the seeding of the upcoming playoffs.

Atoka has only one game this week as it travels to Antlers on Thursday night, following three nights of tough competition in Kingston last weekend.  The Wampus Cats defeated rival Coalgate for the second time this year, and took down ranked opponents from Class 2A – No. 12 Talihina, 60-52 in the semifinal, and No. 3 Latta, 55-41 in the championship game.

“We played two really tough teams in Talihina and Latta, both of them highly ranked,” Harrison said.  “Talihina especially snuck up on some people and showed how good they are. But our guys came through and made plays when they needed to make plays and we came out the wins.”

He is getting solid production from big man Bishop Coulter and brothers Bobby and Tyreke Johnson.

“They’ve really proved to be our “Big Three” guys. Bishop being a big post presence has really opened it up for our guards and at the same time, when they want to pressure our guards, Bishop has proved to be unstoppable this year.”

The schedule doesn’t get much easier for Atoka past its midpoint with a third meeting with Coalgate, another matchup with Latta and hosting ranked teams in Kingston and Byng to close the season.

Harrison said the way for his team to finish strong is to stay the course.

“The key for us is that we just have to keep doing what we’re doing.

“We have a certain style that we play. We’re going to have to tighten up on the defensive end a little bit.