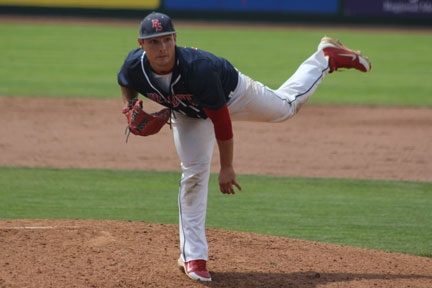 LEWISTON, Idaho- The tenth seeded Rogers State baseball team survived and advanced in the losers’ bracket at the Avista-NAIA World Series with a 4-1 victory over the No.6 seed York (Neb.) on Saturday afternoon at Harris Field on the campus of Lewis-Clark State College.

RSU was led by a standout pitching performance by senior southpaw Brandon Bargas who fanned a season-high 10 Panthers. The Owasso, Okla. native also became just the second Hillcat pitcher in program history with 200 or more career strikeouts. He sits at 207 strikeouts, just six behind Grant Cosby who finished his career with 213.

With the win the Hillcats became the first No. 10 seed to win a game at the World Series since Fresno Pacific (Calif.) defeated Embry-Riddle (Fla.), 8-6, in 2009.

After three scoreless innings, the Panthers dented the scoreboard first in the fourth frame. Bargas hadn’t given up a hit since the first inning but York belted consecutive two-out doubles to plate a run and take a 1-0 lead. However, the lead was short-lived as the Hillcats battled back to knot the score in the bottom half of the inning. Hector Rivera led off the inning with a walk and moved to second with a sacrifice bunt by Jose Olazagasti. Colton Campbell followed with a single up the middle to send Rivera home.

In the top of the sixth, the Panthers threatened with runners on first and second with one out but Bargas fanned the next two batters to end the inning. RSU took the lead in the bottom of the frame. Eric Baker got things started with a one-out single through the left side of the infield. Rivera laid down a sacrifice bunt but a Panther error allowed Baker to reach third and Rivera to reach first base. Olazagasti followed with a single belted through the left side of the infield to bring Baker home. Colton Campbell tallied a RBI ground to give RSU a 3-1 lead.

RSU added an insurance run in the eighth with a squeeze bunt by Olazagasti, sending Baker home to score.
Bargas (9-5) tallied the win as he tossed 7.1 innings, allowing one run on six hits with 10 strikeouts. Sophomore lefty Mason Marquette closed out the final 1.2 innings and earned the save. The Broken Arrow, Okla. native faced the minimum, throwing just 15 pitches. Neither Bargas nor Marquette allowed a walk in the contest.

Tom Korn (10-3) was tagged with the loss as he allowed three runs, one earned, on seven hits in 6.2 innings of work.

Rogers State (36-23) will return to the diamond on Monday as the Hillcats face ninth seeded Missouri Baptist at 11 a.m. CST in the elimination bracket. The Hillcat Network will stream live audio and video of the game and RSU Radio 91.3 FM will also carry the game.