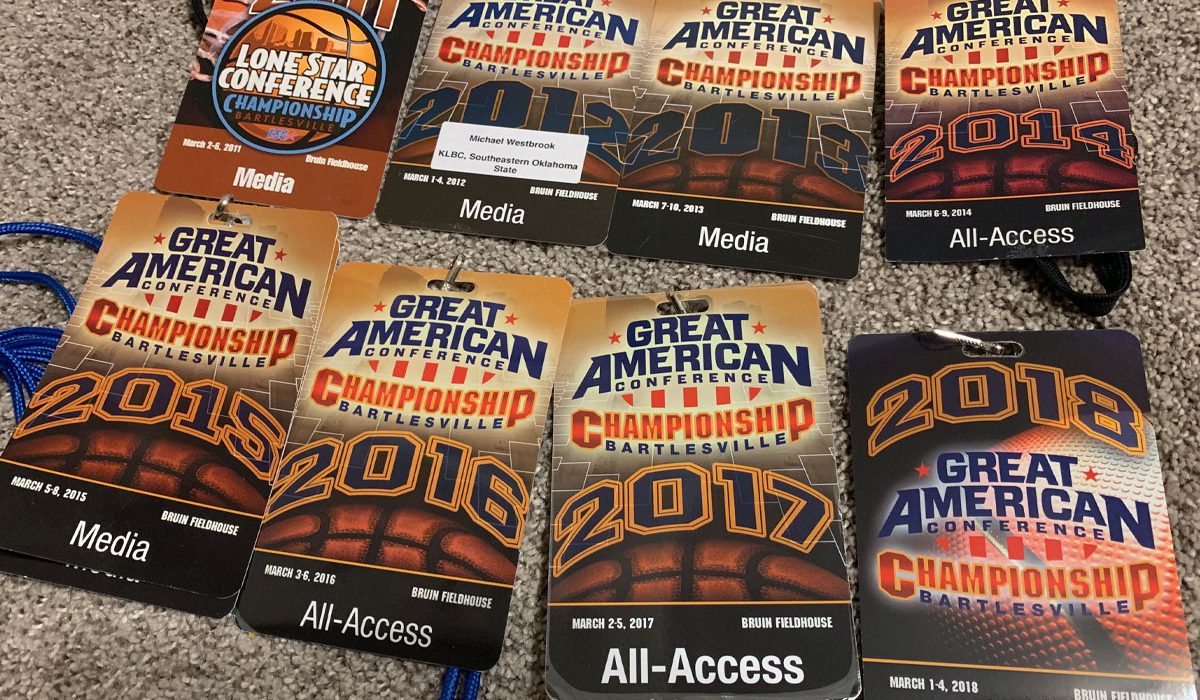 When the weekend concludes, I along with many others will say goodbye to Bartlesville, Okla. This time it won’t be a goodbye until next year, it will simply be goodbye.

Sunday’s NCAA Division II Great American Conference Championship games will mark the conclusion of an eight-year partnership between the Bartlesville Sports Commission and the GAC. The Bruin Fieldhouse also played host to four Lone Star Conference Tournament Championships from 2008 to 2011.  I was fortunate enough to be present for two of those LSC Tournaments and now all eight of the GAC Tournaments; the last seven as the play-by-play announcer for the GAC Sports Network.

When it is all said and done, I will have broadcast 103 college basketball games in Bartlesville in the last 10 years, 96 of those for the GAC Sports Network. Yes, broadcasters do sometimes chart their own stats, although to be honest it took a few days to come up with an accurate calculation.  My long-time broadcast partner Joey McWilliams has always been the better mathematician in the broadcast booth.

I’ve seen several moments that have left fans sitting on the edge of their seats. 103 games total 4,120 minutes of game action, not including overtime making it pretty difficult to select one moment or game as my favorite. Yet, as I look back on the last decade oddly enough it was 40 minutes of basketball on March 2, 2012, my fourth career Bartlesville broadcast that opened the door to the next 99 opportunities.

It was the third women’s quarterfinal game of the day. Back then, I was the radio announcer for Southeastern Oklahoma State University located in Durant, Okla. The Savage Storm men played on Thursday that year and lost its opening round contest by twenty points. The women ended the regular season on a two-game losing skid to set up a first round matchup against top seed Arkansas Tech University on Friday. With no guarantee that the women would win, the radio station management asked me to check out of the hotel prior to the game in an effort to cut down on expenses. After all, Arkansas Tech was 22-3, so I did as I was told and checked out of the hotel before heading to the game.

As the game began, the scoring started quickly with six points in the first 34 seconds, Southeastern led 4-2. Within the first seven minutes of play the game was tied on three occasions. Southeastern pulled ahead 20-14 with 8:47 to play in the first half, but the six-point lead wouldn’t last.  Arkansas Tech scored nine of the next 11 points to go up, 23-22. The game continued to go back and forth and after one half of play, Arkansas Tech held a 35-34 lead.

At that point it crossed my mind that I was several hours away from home with the possibility of a game the next day and nowhere to stay for the night.

During the first commercial break of halftime, I thought it would be wise to start calling hotels. However, I immediately realized I might jinx the situation if I did that, even though I don’t believe in jinxes. Besides nothing had been decided yet.

However, as the second half progressed Southeastern stayed with the Golden Suns.  When Southeastern went up ten with roughly seven minutes to play, I remembered once again my predicament. Reminding myself that my booking of a hotel would have absolutely zero impact on the game I started making phone calls during the last two media timeouts in search of a place to stay. I was unsuccessful.  With about three minutes remaining reality set in that Southeastern would upset Arkansas Tech.  The final score: Southeastern 84, Arkansas Tech 72.

After nearly an hour of trying to find a hotel with a vacant room, I eventually found a place to stay thanks to a Bartlesville volunteer who told me about a travel agency or third party company of some sort that had extra hotel rooms.  I don’t clearly remember the details of how all that was sorted out.

What I do know is that if Southeastern would have lost, I would have been back in Durant by nights’ end. Staying one more day allowed me to meet new people in a brand new league.  I can remember meeting the owner of JBM Productions, Jason Moyer, and expressing my interest in helping with the Sports Network. The following year, an opening occurred and I was invited to take on the role of play-by-play broadcaster for the tournament.

Looking back, it seems unlikely it would have worked out this way had I not been able to stay in Bartlesville one additional day.  However, I’m grateful for that one game in 2012 not because of the number of games it allowed me to broadcast, but for the relationships it helped me build afterwards. Lasting friendships have developed in Bartlesville within the GAC family. Too many to name for fear of leaving someone out.

Plus, I’ve been fortunate to meet some of the most gracious, humble people in the entire state of Oklahoma. Anyone who has spent any amount of time in Bartlesville knows it is the people that made it a place you want to come back to time and time again. Hundreds of volunteers turn out each and every year to make the visitors feel at home. I wish I could thank all of them for their dedication.  And the food. My goodness there is always something to eat.  I don’t eat much before a broadcast, but on multiple occasions the volunteers saved me a plate to eat at the end of the night even after the hospitality area was closed. Two volunteers in particular will always come to my mind when I remember Bartlesville – Mike Wilt and Adam Hooper.

Broadcasting 14 games in four days tends to lead to a sore throat, yet somehow I arrived at one of the tournaments without cough drops. Mike asked if I needed anything, so I told him my dilemma. My thought was that he might go ask someone else if they had cough drops.  I was wrong. Fifteen minutes later my problem was solved thanks to Mike. He didn’t just ask around and then forget about it. He immediately drove all the way home and returned with a brand new bag of cough drops.

I remember the next week, I returned the favor by mailing him a bag of cough drops. Looking back on it now, that was a strange thing for me to do. I mean who mails cough drops to basically a complete stranger?  That kind gesture from Mike created a friendship.  One that I have enjoyed renewing each year.

Also, with that many games there is little down time, but Sunday provides a bit of relief with only two broadcasts.  That is the day I would usually spend the most time talking with Adam.  The long-time Bartlesville sports play-by-play announcer passed away soon after the 2017 tournament.  I missed him dearly last year and will miss him again this year. He was often calling area high school games which kept him from partaking in the entire GAC tournament, but when he had free time he would monitor press row.

Adam always wanted to know what was going on in my world and he would never forget to ask about some of our mutual friends in other cities. He was always eager to assist. I can still hear him asking if I needed something to drink.  I’ve become a bit picky in recent years mainly drinking lemon water to help the voice. It didn’t matter if I said yes or no, Adam was going to bring me a beverage anyway.  If I asked for lemons, he would return with a bowl full.

Mike and Adam are just two of the people who embody what Bartlesville is all about.  I’m thankful to both of them and many more for everything they have done to make all of us feel welcome. On Sunday, I’ll say goodbye to the Bruin Fieldhouse and the people of Bartlesville from the Adam Hooper Memorial Press Row, but I’ll take the friendships and memories with me.