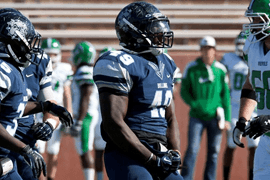 LITTLE ROCK, Ark. – The offseason of awards for SWOSU’s Devin Benton added two new honors on Thursday as the senior defensive tackle was named a finalist for the 2014 Cliff Harris Award and a First Team All-American by Beyond Sports Network, earning his first career All-American nod. 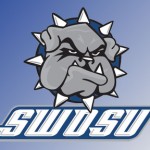 “There are numerous outstanding small college defensive players around the country and I’m glad we get to acknowledge them today as finalists for the 2014 Cliff Harris Award,” the namesake of the award, Cliff Harris, said in a release by the committee.

The finalist list includes 38 Division II players, 18 Division III players and 14 players from NAIA. An overall winner will be announced on December 24 and honored at the Little Rock Touchdown Club’s annual awards banquet in February 2015. The winner will receive the $3,000 Cliff Harris Award trophy presented by Cliff Harris along with featured speaker, NFL Hall of Fame member and former Dallas Cowboy Michael Irvin. In addition to the overall winner, the top vote getters from each division will also be announced. A prestigious group of former college and pro football greats serve on the Cliff Harris Award Committee.

The inaugural winner of the award was Lindenwood University cornerback Pierre Desir, who was selected in the 4th round of the NFL Draft by the Cleveland Browns. Ten percent of the 2013 Cliff Harris Award finalists made NFL rosters this season.

For the story of Cliff Harris, go to www.CliffHarrisAward.com and read about his amazing journey from an overlooked high school player from tiny Des Arc, Ark., and one scholarship offer to then-NAIA Ouachita Baptist University to five Super Bowls and six Pro Bowls with the Dallas Cowboys.

In addition, Benton earned a first team selection to the 2014 Beyond Sports Network Division II All-America Team for his first of what figures to be several All-America honors. His selection marks the fourth straight year a Bulldog has been named to the BSN All-America Team joining Clarence Laster (2011, First Team), Colton Rainey (2012, Third Team) and Ryan Corbin (2013, First Team) in earning the honors.

Benton, who already has three All-Super Region 3 selections to his credit, was named the GAC Defensive Player of the Year after leading the conference and ranking fifth in NCAA Division II with 23.0 tackles for loss. He was then named the Super Region 3 Defensive Player of the Year by BSN while also being named a finalist for the Gene Upshaw Division II Lineman of the Year award. The senior from Arlington, Texas finished his career ranking first in sacks and tackles for loss at SWOSU in the NCAA Division II era and became the first four-time All-GAC selection in conference history.