Southwestern, Musick getting ready for the GAC home stretch 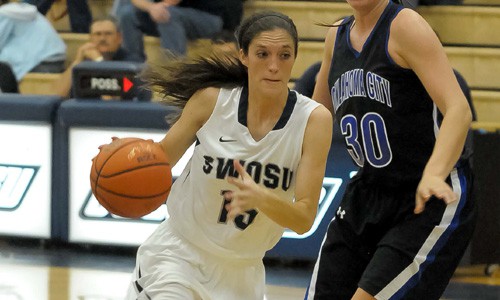 Southwestern earned two big wins in Arkadelphia last weekend over Henderson State and Ouachita Baptist.  Coach Kelsi Musick and her team know they need to continue the winning ways going into this weekend of rivalry games in the Great American Conference schedule.

SWOSU won eight of its first nine games, but hit some midseason bumps in the road and have since gone 3-3.

While Musick gives her team a good grade to this point in the year, she said she knows there is room for improvement.

“So far, I think we’re doing pretty well,” Musick said.  “I don’t think we’re playing up to our potential, though.

“But considering that I have 11 new players and only two seniors that return and after losing six seniors from last year’s season, I think we’re doing well with the youth that we have.”

Southwestern is 11-4 overall.  The GAC record is 6-3, which is fifth in the league, but realistically only one game out the four-way logjam in first place at 7-2 (Arkansas Tech, East Central, Harding and Ouachita Baptist).

PIECES OF THE PUZZLE

The seniors that returned for Musick have done their part this season.  SaRaya and MaRaih Oyler, from Beaver, are averaging about 27 minutes per game and 10.6 and 8.9 points, respectively.

Junior guard Michelle Fisher has earned a starting role this season and is leading the team in scoring, putting up 17.9 ppg, and has garnered GAC Player of the Week honors earlier in the year.

Other pieces of this team that have fallen into place are new to Musick’s program.

“A couple of my starters are junior college transfers (juniors Natalie Gibson and Sarah Mendoza),” Musick said.  “It helps us in that they’ve actually played college basketball at some level.  That makes a big difference.  But they’re still new to our system.  And I definitely think that what we are doing this year is going to carry over into next year.”

The Lady Dawgs have also been getting good production from their bench in the form of Kimmi Sawatzky, a hometown Weatherford product.  The sophomore had a career high 27 points in the win over OBU and has also been a conference player of the week.

Southwestern ended last season on a seven-game winning streak that culminated in the GAC tournament championship.  Because the conference, then in its inaugural season, didn’t receive an automatic bid to the national tournament, the Lady Dawgs’ season ended with that win.

SWOSU had a seven-game streak of victories this year as well, but it came to a halt when the calendar turned.

“Well, I wish that we didn’t have to take a Christmas break,” Musick said with a smile.  “I think we would have been better off.

“But I think that they’re understanding that playing conference games, which is all we have left, is definitely more mentally trying than physically trying.  This is something we’ve been working on and I think we have grown mentally in this first part of conference play to hopefully help carry us over to start going on a roll and playing better as a whole.”

The wins last weekend on the road over HSU and OBU were the first back-to-back GAC victories since SWOSU opened conference play in late November.

“You have to teach your kids that to be able to play on the road and to help them realize that it’s not any different and we stressed that,” Musick said.

“Our team knew going into Arkadelphia that we needed those two wins and I felt like we came out and played like we were capable, much better than we had in the previous four outings.  But the other thing is just allowing our team to play closer to 40 minutes playing together, doing what we do, especially executing offensively.”

Southwestern hits the middle of the conference schedule with a home game tonight against a new conference rival.

“We’re about to take on Southern Nazarene again and they are a very talented team,” Musick said.  “We played them right before the Christmas break.  We had a lead on them and we let them back in the game.”

“And then we go to Northwestern, which will be our first time to play them this season.  They’re both quality teams, coming up from NAIA to Division II, and they’re definitely going to be great for our conference.”

Southwestern will not be seeing a stranger when playing their opponent in Alva.

“We’ve been playing them the last couple of years in exhibition games.  And everyone tells me about the old NWOSU/SWOSU rivalry and we’ve been trying to get that going again.  And now that they’re in conference, it will be an every year thing.”

Musick said she expects this to be a revealing weekend of games throughout the GAC as her team tries to position itself for the postseason.

“We’re right there,” Musick said.  “I think a lot of things are going to be shaken up this weekend.  Harding plays Tech – someone’s got to lose that game.  That’s going to be a tell-all for the conference as far as the cream of the crop up there.

“And as we go into this second half of the conference season where everyone will meet again, and this time a little more confident and a little more settled.

“Luckily we have some big home games that I think will help.”

After tonight’s contest, SWOSU will be on the road for three straight, but will close out the regular season with five of seven in Weatherford.