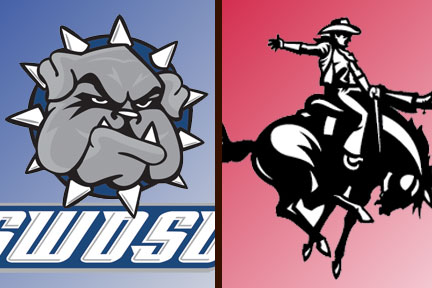 ALVA, Okla. – Big plays helped the SWOSU Football team build a 21-3 halftime advantage, but the Bulldogs still had to hold off the rival Rangers of Northwestern Oklahoma State in the regular season finale, defeating NWOSU 31-17 at Ranger Field on Saturday afternoon.

It took little time for the action to commence, but SWOSU was on the wrong side of two unsportsmanlike conduct penalties on the opening kickoff, which backed the Dawgs up to their own six yard-line to start the game. Distance was no object to SWOSU’s Kenneth Martey, who took the second handoff of the game 93 yards for a touchdown, the longest rush in SWOSU Football history. The score made it 7-0 less than one minute into the game and broke the previous record of Farland Dindy, who had an 83-yard touchdown run against Eastern New Mexico in the 1978 season.

Northwestern got great field on their next possession, taking the ball near midfield and driving the ball to the SWOSU four yardline before the Bulldogs held them to a field goal that made it 7-3 with 9:34 to play in the quarter. After sharing punts and fourth-down stops over the next quarter, SWOSU got on the board with another big play as Karltrell Henderson broke free for a 66-yard touchdown – tying his longest run of the season – that made it 14-3 in favor of the Dawgs with 10:30 to play in the half.

The defense again forced a three-and-out against the Rangers and got the ball back and needed just three plays to strike again, this time through the air. Marc Evans went up top on first and 10, finding Derrick Styles for a 51-yard touchdown that made it 21-3 with 7:16 to play in the half. Both teams again traded three-and-outs over the next four combined drives before Northwestern drove deep into SWOSU territory near the end of the half, where the Bulldogs defense again made a stop on fourth down to take the game to halftime.

The third quarter was fairly uneventful until SWOSU attempted a fourth-down conversion at their own 29-yard line. After the Rangers stopped the Dawgs attempted quarterback keeper, they went in to score their first touchdown of the game to cut the led to 21-10 with 3:43 to play in the quarter. Once the wind switched back to SWOSU at the start of the fourth quarter, the Bulldogs drove 48 yards in eight plays and Tyler Peterson put through his second field goal of the season to extend the lead to a full two touchdowns at 24-10 with 11:36 to play.

Northwestern would not go quietly, however, as they responded with a 12-play drive that covered 75 yards and included two fourth-down conversions. Ranger QB Reid Miller made a tremendous run on fourth and goal from the 22-yard line, diving into the end zone to cut the Bulldogs lead in half at 24-17 with 7:05 to play. The Rangers defense then forced a SWOSU punt and got the ball back trailing by just one score, but the Bulldogs defense tightened up and held the Rangers to one yard and a three-and-out situation.

After getting the ball back at their own 32 yard line, SWOSU needed just three plays to push their lead back to two scores as Karltrell Henderson carried the ball on all three plays before breaking a 25-yard touchdown run on third down and three. As Henderson high-stepped his way into the end zone, the Bulldogs could taste the victory and the likely postseason berth that comes with it.

Henderson led the Bulldogs with 168 yards and two touchdowns on the ground after carrying the ball 22 times in the victory. His backfield teammate, Martey, added 134 yards and one score on 13 carries for a 10.0 yards per carry average to help the Dawgs outgain Northwestern 295 yards to 108 on the ground and 500 yards to 352 overall. Marc Evans completed 13-of-27 passes for 205 yards and one touchdown, with D.J. Jones making six catches for 91 yards.

SWOSU was led defensively by Trevon Hartfield, who finished with 14 tackles, including 13 solo stops, as the Rangers constantly attempted to test the Bulldogs star corner. Tyler George added five tackles, 2.5 tackles for loss and a sack while Collier Ward and Dejai Johnson also made sacks and Ward and Kapena Olsen recovered fumbles in the game.

“Words can’t really express it,” SWOSU Head Coach Dan Cocannouer said when asked about his feelings following the rivalry win. “I’m so happy for our players and coaches because they work their tails off and they deserved this because of all the hard work they’ve put in. It’s pretty remarkable that we now have a chance to go to a Bowl Game, we’re excited and looking forward to it!”

SWOSU finishes the regular season with an 8-3 record, their best single-season record since they transitioned to NCAA Division II in 1997. They also finish tied for second place in the GAC standings with Arkansas Tech, a team the Bulldogs defeated last Saturday to own a head-to-head tiebreaker for postseason opportunities. SWOSU now awaits their postseason fate, which is likely to include a bid to the Live United Texarkana Bowl, a game that will be played on Saturday, December 5th in Texarkana, Arkansas. Final postseason pairings will be announced early next week.