Big second half lifts SWOSU past ECU on Homecoming 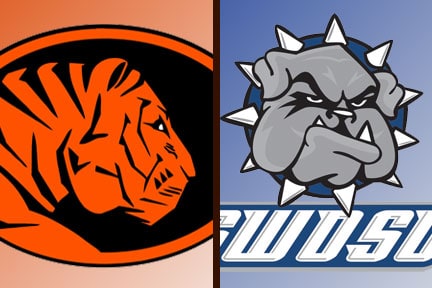 WEATHERFORD, Okla. – SWOSU scored four touchdowns in the second half as it came from 10 points down to defeat East Central 38-31 on Homecoming at ASAP Energy Field. The victory evens the Bulldogs record at 3-3 on the year.

A Dalton Jackson field goal and a 47-yard touchdown pass from Marc Evans to D.J. Jones accounted for the scoring in the first half as SWOSU went to the locker room facing a 20-10 deficit. After being shut out for two straight weeks, the Bulldogs offense found their groove again in the second half, outscoring the Tigers 28-11 after the break to earn the victory.

Evans found Derrick Styles for a 34-yard touchdown pass on the opening drive of the second half, pulling the Dawgs within three before ECU pushed their lead back to six with a 24-yard field goal. Evans found Karltrell Henderson in the flat and the Bulldogs running back raced 56 yards past all Tiger defenders as SWOSU regained the lead at 24-23 with 6:09 to play in the third quarter. ECU used a six-play, 69-yard drive to answer the Bulldogs, scoring a touchdown and converting a two-point conversion to take a 31-24 lead into the fourth quarter.

On their first drive of the quarter, the Bulldogs took advantage of three unsportsmanlike conduct penalties on East Central and completed a 12-play, 86-yard drive – SWOSU’s longest of the night – to knot the score at 31-all when Henderson again found pay dirt, this time from three yards out. After the SWOSU defense held the Tigers, the Bulldogs struck quickly with a four-play, 80-yard drive, with Kwame Tate scoring the go-ahead touchdown with 8:08 to play.

SWOSU’s defense promptly forced a three-and-out to get the ball back and they would be forced to make one final stand as the Tigers got the ball back with 4:03 to play. After ECU got two first downs and drove close to midfield, the Bulldogs got that final stand with pass breakups from Ja’Vaughn Mitchell and Conner Bays followed by a pair of incompletions that turned the ball over on downs with 2:07 to play. SWOSU’s offense then got the first down they needed to run out the clock.

In his return to the starting lineup, Evans was 23-for-46 passing for 369 yards and three touchdowns, with his yardage mark ranking as the fourth-most single game total at SWOSU in the NCAA Division II era. His favorite receiver on the night was Jones, who had four receptions for 127 yards and a touchdown, while Henderson, Collin Bricker and Hunter Dinkines each had three catches.

The SWOSU defense was again led by safety Conner Bays, who reached double figures in tackles for the fifth time in six games with 10 stops and two pass breakups to his credit. Seven different players had a tackle for loss for SWOSU, led by Jake Doyle with 2.0, and Clinton Horn and Dejai Johnson each recorded sacks in the win. Trevon Hartfield picked off his first pass of the season and added two pass breakups to his season total.

“Early on, East Central was more physical than us and they were taking it to us,” SWOSU’s head coach, Dan Cocannouer said in his postgame interview. “I told our guys, the only way to shut them up is to give it right back and I think our guys did a good job of that. We had a couple guys on the second team step up and make plays and I’m proud of the way they handled that.”

SWOSU evens their record at 3-3 on the year and earn their first victory over East Central since 2012. The Bulldogs are also now 3-0 at ASAP Energy Field this season with two more home games coming up in the next three weeks. SWOSU is back at home next Saturday to face Southern Nazarene, with kickoff slated for 2 pm.