Bison are young and united 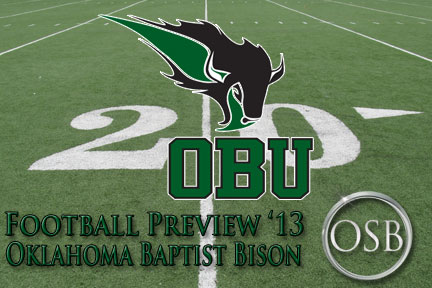 When you’re young, everything is new.

With the OBU Bison football team this fall, everything is new and pretty much everyone is young.

Oklahoma Baptist head coach Chris Jensen knows that he has a lot of talent to work with in his newly revived program, but the majority of that talent is young.  The vast majority.

“We do have some upperclassmen, but not many that are classified higher than a sophomore,” Jensen said.  “We have a couple of juniors on there and I think there’s one senior on the roster.

“We do have a significant number of freshmen on the roster and a lot of those guys were redshirts last year, that went through the leadership class last year. And we brought in more than 40 that are new to campus this fall.  Yes, we do have a lot of younger players out there.”

But Jensen and his staff have put months and months of training into this squad and he is pleased with the way his team has retained its instruction through this very long preseason, which included a summer break.

““We felt like the guys came back in great shape, in great condition.  I think they’re united in their desire to put the best product on the field, to be the very best that we can.

“We’ve challenged through this preseason training camp and they’ve responded.  We’re very pleased with the progress they’ve made to this point.”

The offense is starting to take shape with the release of the two-deep this week.  Cale Grauer has emerged as the starting quarterback going into the opening game.  The sophomore who led Lincoln Christian to a 2A state title in 2009 hasn’t seen real action on the field since then.  Expect to see Blake Woodard under center as well over the course of the first games.

SMU-transfer Darryl Fields, an All-Stater in both football and track, will be the starter in the backfield, with Cy Stallard as the fullback.

Mike Miears is the Bison center, who is flanked to the left Dustin Malloy and Zach Clark and to the right by Mark Knapp and Van Gray.

Jensen is reunited with a number of Southmoore players he coached in his previous job, including All-Stater Tylor Whitfield, who will be at the nose tackle position on the three-man front for the Bison defense and Kimes Gilbert, one of the ends. Christian Edmonds will be manning the other defensive end position.

Nelson Mederlos and D’Ante Meeking are at the corners with Eugene Estes and Dominic Shegog as the safeties.

The Bison will be a part of the Central States Football League in their first season back and have some challenging opponents with the conference schedule.

There are four games on the Bison schedule before hitting the league portion of the schedule, beginning with Southwestern College (Kan.) on Saturday.  It will be a 1:30 p.m. kickoff in Shawnee, and it’s likely the entire city will be in attendance.

The first CSFL game for OBU will be Oct. 5, as the Bison travel to Waxahachie, Texas, to take on the Southwestern Assemblies of God Lions.

OBU goes on the road for the two toughest CSFL games in back-to-back weekends, going to Langston on Oct. 26 and then to Muskogee to face Bacone on Nov. 2.

Homecoming and Senior Day will coincide on Nov. 9, when the Bison host Division II opponent Oklahoma Panhandle State.  And the regular season concludes at Tyler, Texas, against the Steers of Texas College.

The Bison are just ready to get this season underway.

“Our stadium is taking shape,” Jensen said.  “We’ve got the stands up and the scoreboard in.  The goal posts are in and the field is in great shape.  The excitement is mounting.  Season ticket sales have been phenomenal.

“I’m really excited about that day, that first game.”

That first game is tomorrow.