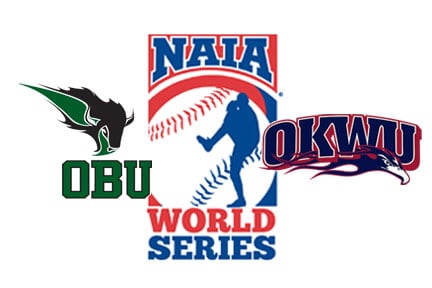 Oklahoma Baptist and Oklahoma Wesleyan each have more stop to make in the 2014 season: Lewiston, Idaho.

The Bison and the Eagles have advanced to play in the 10-team field of the Avista NAIA World Series.

Although both were top seeds, OBU was pushed to an elimination game on the championship day and OKWU had a winning margin of only five runs in its three wins.

No. 1 Oklahoma Baptist didn’t have to leave Shawnee, as it hosted a regional bracket.

Rain pushed back OBU’s first game, but the Bison took care of Bacone, 10-3, on Tuesday.  In Wednesday’s early game, they shut out second seeded Bellevue, 4-0.

The 18th ranked Bruins forced an “if necessary” game with a 4-2 win over the Bison.  But OBU shut the door on Bellevue early in the championship game, picking up nine runs in the third and cruising to a 13-6 victory to win the Shawnee region.

No. 3 Oklahoma Wesleyan had to travel to Jackson, Miss., for its regional tournament.  The top seeded Eagles dispatched Houston-Victoria, 5-3, in their opener.

OKWU then had to beat the host team twice on its home field, winning 4-2 in the first matchup and grabbing a run in the ninth for an 8-7 victory to move on to the world series.

The state’s representatives bring a combined 108 wins to Lewis-Clark State as the final bracket of the 2014 NAIA baseball tournament gets underway on Friday, May 23.