Bison open with a bang, but fall to Moundbuilders in season opener 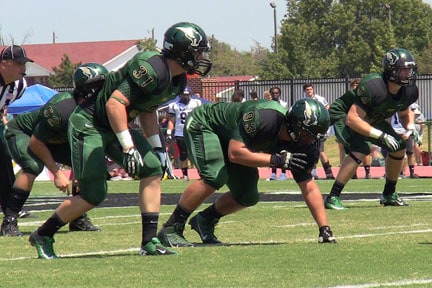 In the opening quarter, the Oklahoma Baptist Bison showed no signs of the rust that might have accumulated on a program that just emerged from a 73-year hiatus.

OBU scored on the first play from scrimmage and opened up a 15-0.

But Southwestern College (Kan.) responded and came back to defeat the Bison in their season opener, 26-22.

OBU drops to 0-1 on the early season.

Cale Grauer connected with Derek Serowski for a 69-yard touchdown strike for the Bison on their first offensive opportunity.  Coach Chris Jensen was not surprised by the result.

“I told the other coaches that we were going to throw to Derek with the first play because I didn’t think they had time to accurately assess his speed on the film,” Jensen said.

Although he conceded the coolness factor that such a score happened like it did for the program that had been long dormant.

“It was pretty exciting that it happened on the first quarter like that.”

The Bison kept that early lead through the first quarter, but the Moundbuilders fought back in the second stanza, scoring four times.  The OBU defense held Southwestern scoring to field goals three of those times, but the Bison still trailed 16-15 at the intermission.

Two plays into the second half, OBU retook the lead with a 37-yard touchdown pass from Grauer to Turner Coon.  But that would be the final time OBU would score.

It was 104 degrees throughout game time with a heat index that ranged from 110 to 115 degrees on the final day of August in Shawnee.  But the stands at Bison Field at the Hurt Athletic Complex were full (and beyond) throughout the long, hot afternoon.

The crowd was tallied at 5,609 on the day, a Hurt Complex record by far.

But the heat played a detrimental part in the outcome for the Bison.

“The heat was a concern and I really started questioning why I put our kids in all green uniforms,” Jensen said.

Jensen used many substitutions throughout the game, but it was commonplace to see a Bison player walk stiffly to the sidelines stiffly, looking as though he was dealing with cramps.

“But we felt like our effort was phenomenal and that’s what I challenged the guys with and they responded.”

The Bison rushed for only 88 yards on the day, with Jordan Barnes responsible for the bulk of that load, carrying the ball 14 times for 79 yards.

And Jensen saw that facet of the game as a key issue.

“We just couldn’t establish consistency in our running game,” Jensen said.  “On offense, if you’re either a big play or three-and-out, the defense is on the field a lot.

“I felt like we put our defense in a difficult position time and time again.  But I felt like even with their backs against the wall, they fought and scrapped and did everything they could to try to help us be successful.”

That defense kept forcing field goal attempt (four) or turnovers (four) many times that Southwestern got within striking distance.  Bryson Beattie accounted for one of those turnovers with an interception in the Moundbuilders’ endzone.

Cale Grauer finished the day passing for 11 of 25 for 203 yards with three touchdown passes and three interceptions.

Oklahoma Baptist will be at home next weekend as well, hosting St. Mary (Kan.) at 2 p.m.