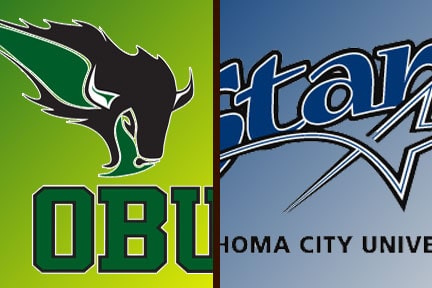 “Everyone has to contribute,” said OBU Coach Doug Tolin. “That’s what this team is going to have to be. We don’t have the firepower to rely on one or two people. We have to be running on all cylinders.”

The Bison trailed 56-48 with 9:38 left in the game, but Clinton Houston converted a three-point play, Marques Anderson scored of an offensive rebound and Houston got another second-chance basket to make it a 56-55 game with 7:03 to play.

Adams had been struggling at the three-point arc coming into the game, but hit four of nine from three-point range. He also had 10 rebounds.

“It felt good just to see the ball going in,” Adams said. “I’ve never had 10 rebounds before but I was just crashing the boards. I’m proud of how all of us played today.”

Neither team hit a field goal in the last two minutes, but with 24 seconds left, OCU trimmed the lead to 72-69.

OBU missed two free throws with 13 seconds left, but Anderson rebounded the second miss and the Bison got two more chances. OBU missed twice more and David Johnson nearly came up with another offensive rebound for the Bison but lost the ball out of bounds with four seconds left.

OCU’s Charlton Jones stumbled on his way up the court and launched a three-pointer that was far off target.

“Kendall Parks did a great job on him tonight,” Tolin said. “We were going to foul as he crossed half court, but Kendall recognized Jones was in trouble and backed off.”

The Bison got 18 points from Adams, 15 from Houston and 14 from Johnson. Johnson and Parks had four assists each.

OBU out-rebounded the Stars 41-34, including 20 offensive rebounds. Adams and Anderson had 10 caroms each. Adams also blocked two shots and had two steals. Johnson led the team with three steals.