Bison remain unbeaten in the GAC 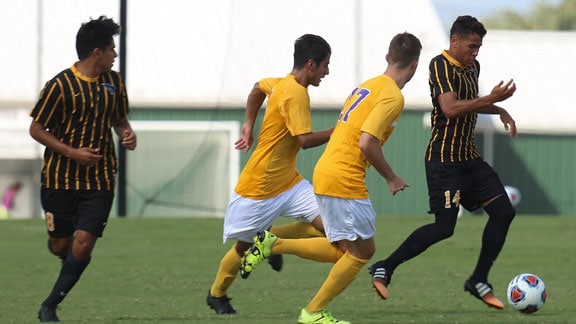 The Bison (8-4-1) improved to 4-0 in GAC play while sweeping the season series with the Tigers (5-7), and are on the verge of clinching first place in the league. A win or draw with Harding in Friday’s match would guarantee a first place finish for Oklahoma Baptist.

Colin Spencer and Thomas Ackernecht combined for the fifth shutout in a row for the Bison, setting a new program record for consecutive shutouts. Spencer made three saves in 72:40 played, while Ackernecht saved both shots he faced in 17:20 between the sticks.

Thiago Dos Santos scored the only goal of the match, getting free on a breakaway and beating the keeper for the game winner in the 86th minute. Martin Romero assisted on the play, finding the streaking Dos Santos for his fifth goal of the season.

Dos Santos attempted a match-high seven shots, including four on target, as the Bison took 20 total shots while limiting the Tigers to just 11 for the match. Vicente Castillo added four shots, while David Estrada and Jonathan Martinez each attempted two shots.

Oklahoma Baptist wraps up a three-match road trip Friday at 7 p.m. against Harding in Searcy, Arkansas. The Bison took down Harding 4-2 in the first meeting between the teams this season.